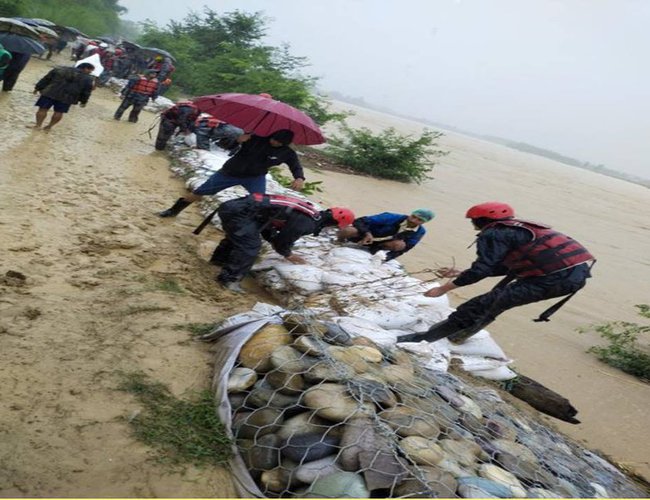 As it was unusual, heavy rain occurred at the end of the monsoon season. The damage and devastation caused by four days of rainfall at the end of September created havoc all over Nepal. However, the damage was much higher in Karnali, Lumbini and Sudurpaschim Province.

As the globe is warming, heating the earth, this kind of unusual rain will likely be normal. Scientists have already predicted that Nepal will have to face severe consequences.

Like in all major floods and disasters in the past, Nepal Army got heavily involved in saving lives in Jumla, Banke, Bardia, Surkhet, Dang, Kailali and Kanchapur.

Chief District Officer Ramhari Sharma said it will take some days more to open the Kalikot section of the highway.

CDO Sharma said that 19 persons had gone missing in the incidents of flood and landslide following incessant rains in the district so far this year.

Nepal Army used its helicopter to safely rescue people in the flood affected areas. Nepal Army’s helicopter has rescued numbers of people trapped in the landslides and brought them to district headquarter.

People were killed in Jumla, Pyuthan, Salyan, Dhading, Jajarkot, Lamjung, and Dang districts, according to Dr. Dijan Bhattarai, Spokesperson and Under Secretary at the National Disaster Risk Reduction and Management Authority (NDRRMA). 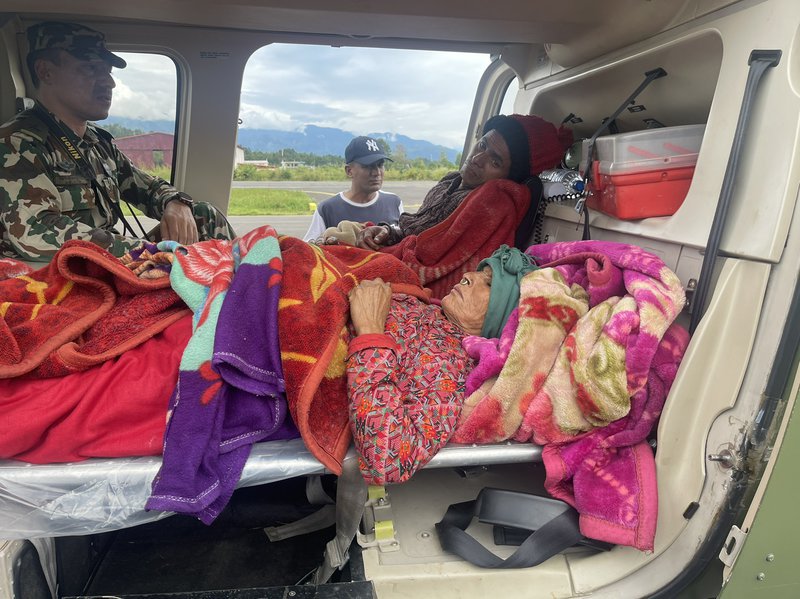 Among the total deceased, 12 were men and seven women. In a total of 52 natural disaster cases that occurred in 24 hours, five people had been injured. According to NDRRMA update, the highest rainfall was measured in Dadeldhura with 120 mm in those 24 hours. According to an update of the NDRRMA, out of 187 rain measuring stations of the Meteorological Forecasting Division, 144 stations recorded rainfall.

Inundations and floods after continuous rains in Nepalgunj of Banke district displaced families from nearly 5,000 households.

Breaking all the records so far, when the big flood in the Rapti River entered the Tikulipur settlement in Rapti Sonari Rural Municipality 2,400 families were displaced, according to the Banke Disaster Management Committee. About 3,000 locals have been displaced in the village alone.

Rupan Gyawali, information officer of the Disaster Management Committee, said that work has begun to shift the affected to a safe place. In the same way, 1,500 people from Duduwa Agricultural Chowferi and Panjha villages have also been displaced.

Similarly, the ward office said that more than 500 residents of more than 100 families were also displaced after the flood in Duduwa river in Nepalgunj Ward Number 18 and 20 of Manikapur area. According to the Rural Municipality, 200 houses in various villages of Narainapur, which were heavily affected by floods and inundation, were damaged and more than 7,000 local residents were affected there alone.

Most of the wards of Nepalgunj have been flooded again due to the heavy rain that started on the following morning. Due to heavy rain for two hours, hundreds of houses and shops were waterlogged.

The incessant rain had stopped, but due to the heavy rain again from that morning, dozens of houses were flooded after water accumulated in most parts of the sub-metropolitan city. 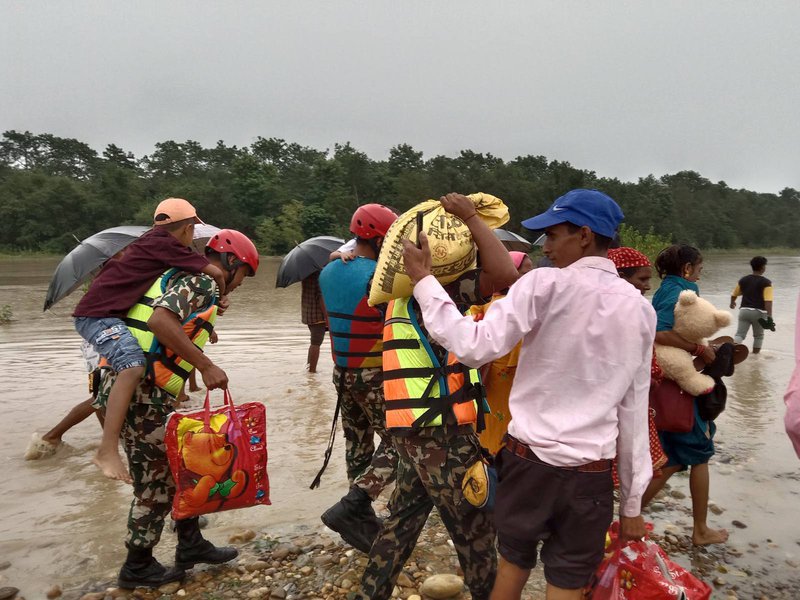 Gharbari Tole of the city, the area from Setuwichok to Triveni turn of New Road, Ganeshpur settlement, bus park area, Dhambozhi, Ekalaini Tole, Bilaspur, Korianpur and Bhrikutinagar and many areas of wards 20, 14, 22 and 23 had been flooded. Flooding occurred after the water flow of the big canals built for the drainage of water in Surkhet Road, New Road and other places was blocked, according to the locals.

Normal life of Kailali residents has been affected badly after most of the houses got waterlogged due to incessant rains. After the continuous rains for four days, the life of those living under the tent and tarpaulins along Postal Highway of Dhangadhi has been hit badly. More than 300 families of Bhajani Municipality have been displaced. Locals have faced floods that entered from Kandra, Kandha and Pathraiya rivers.

Jay Prasad Dhungana of Bhajani Municipality-8 Sonaphanta said that the displaced people living under tarpaulins on the road are forced to live without foods and clothes.

Landslides damaged 1,495 houses in Kalikot. Kalikot district has been declared a food-hit district. More than 1,495 houses were damaged and more than 3,000 people were rendered homeless due to continuous torrential rains.

Local Tila River washed away a bridge at Serighat in Kalikot road section. Even the alternative road has come to a halt. Locals have even been experiencing difficulty in crossing the road due to risk of landslide.

Local’s access to the district headquarters residing in ward numbers 1, 2, and 3 of Shubhakali Rural Municipality of Kalikot district and Khanda Chakra Municipality-2 have also been disrupted.

According to District Police Office Kalikot and information officer Shubraj Bam, the road of Serighat is the most dangerous followed by landslides in Sunarkhola, Ranchuli and Jubitha. He said that it will take time to clear the debris of the landslides.

The meeting of the District Disaster Management Committee has decided to declare the district as food- and disaster-hit district.

Similarly, more than 667 families have been displaced. The Committee meeting has declared a food-deficient district as the rains have completely destroyed the crops and vegetables planted by the farmers.

In the initial and first disaster affected report collection, 3,000 people have been found directly affected and 667 families rendered homeless. 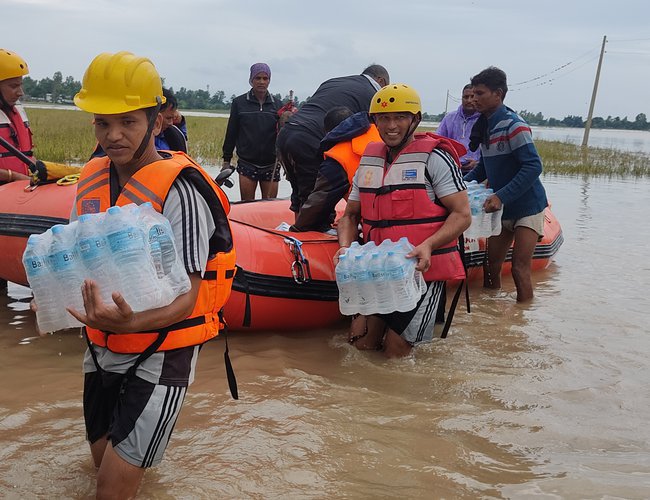 The Committee’s coordinator and chief district officer, Ramhari Sharma, said that the largest loss of property and infrastructure was reported in Tilagufa Municipality.

Meanwhile, life in Lumbini Province has become difficult because of incessant rains. Hundreds have been displaced by floods and landslips triggered by the rains over the week.

16 Day Of Activism Against Gender Based Violence By NEW SPOTLIGHT ONLINE 7 hours, 58 minutes ago

World AIDS Day 2022: The AIDS Response Is In Danger By NEW SPOTLIGHT ONLINE 1 day, 4 hours ago