In The Middle Of A Devastating Climate Crisis: DanChurchAid Turns The Past Into Action

In The Middle Of A Devastating Climate Crisis: DanChurchAid Turns The Past Into Action 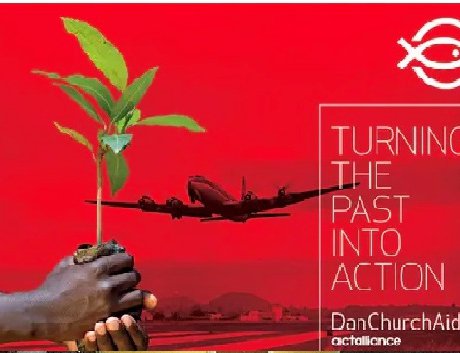 As the first major development organization in the world, Dan ChurchAid has calculated its carbon footprint for the last 100 years and takes responsibility for historical and future emissions. The pioneer initiative is launched at the climate summit, COP27, in Egypt.

Dan ChurchAid has, as the first significant development organisation in the world, calculated its historic climate footprint and takes responsibility by capturing greenhouse gas emissions through 100 years of development operations.

In addition, the organisation sets new and ambitious standards to reduce all future emissions. The General Secretary of DanChurchAid, Birgitte Qvist-Sørensen, says:

"In Dan ChurchAid we are firsthand witnesses to how climate change displaces and causes food insecurity for millions of people worldwide. For us, the obvious thing is to set an example and to pioneer new standards of climate responsibility. We take responsibility for our historical emissions and invest in climate adaptation and tree planting in developing countries. It benefits people who are already facing severe droughts, floods, and extreme weather due to climate change."

DanChurchAid has, through its 100 years as a development organisation, emitted around 165.000 tons of CO2 into the atmosphere by coordinating airlifts, clearing landmines, supporting partners with their efforts to build resilience and local development, running secondhand shops etc.

DanChurchAid is now investing in climate adaptation and loss and damage, and planting 280.000 trees to account for our historic emissions. The initiative is launched as an integrated part of development work benefitting smallholder farmers and Ugandan communities.

"Of course, it is difficult to make up for the full climate misdeeds of the past. But we can estimate past emissions and do as much as we can, by investing in climate adaptation and tree planting for the benefit of people in developing countries. They pay the highest price for climate change in which they have the smallest stake," says Birgitte Qvist-Sørensen.

"With this historic initiative we acknowledge our part of climate responsibility. We hope to inspire others around the world to aim for the same high standards. We present the initiative at the climate summit, COP27, in Egypt and urge the developed countries to live up to their historic responsibility and raise climate finance to the developing countries."

“We are not only facing a climate crisis, we are also facing an unfair crisis. Those with historic responsibility for global warming, should turn their past into action.”