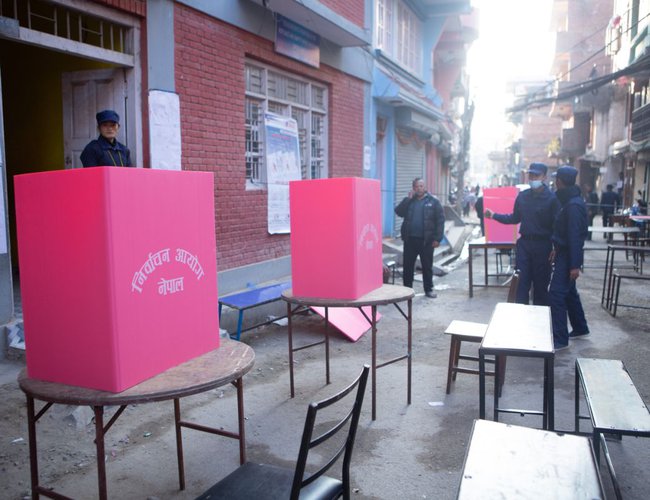 A total of 17,988,570 people – 9,140,806 males and 8,847,579 females – are exercising the voting right today casting their votes for the candidates of House of Representatives and Provincial Assembly across the country.

Following the peace agreement with Maoist, the first elections for Constituent Assembly was held in 2008 and second in 2013. After the promulgation of new constitution this is the second general elections.

According to the Election Commission (EC), all kinds of necessary steps have already taken to ensure the elections free, fair, fearless and credible manner.

Of the 550 members of seven provincial assemblies of the nation, 330 will be elected directly and 220 through PR system.

At the federal level, 867 are standing as independent candidates. That number is 1,094 for the provinces.

According to the commission, the total FPTP candidates for the HoR, 42.16 per cent come from the Khas Arya community, 20.98 per cent Madhesis, 26.58 per cent belong to indigenous nationalities, 4.02 per cent Dalits, 3.40 per cent Muslims and 2.8 per cent Tharus.

Altogether, 87 political parties are registered with the EC and are eligible to participate in the FPTP vote. However, the number of parties actually participating in the process is 61. According to the data provided by the EC, 47 parties have submitted closed lists of candidates for the PR system.

To enable people to vote, the EC has fixed 10,892 polling stations and 22,227 polling centres across the country.

Additionally, it has also fixed 141 temporary polling stations from where around 450,000 voters will cast their ballots for the PR seats.

After the promulgation of the constitution in 2015, this is the second election for the HoR and provincial assemblies. The first one was held in two phases in 2017.

The government has also set up a three-tier security arrangement, with the police, Armed Police Force (APF) and the army forming concentric security circles around polling centres to ensure peace and safety at the booths. A total of 115,000 temporary police, 74,849 soldiers, 71,693 police personnel, 35,116 APF personnel and 1,821 officers of the National Intelligence Bureau have been deployed for security. What’s more, the country’s open border with India has also been sealed.

The government has also deployed bomb disposal teams at 903 places. Furthermore, reserve forces of security officials have also been managed in such a way that they will be able to reach any polling station in the country within 30 minutes, if required.

Likewise, EC has mobilized 246,960 employees and around 300,000 security personnel for the election.

Meanwhile, election commissioners from India, Bhutan, Bangladesh and Maldives along with 44 national and two international organizations will be observing the polls. Total 18 diplomatic missions based in Kathmandu will also observe the elections.

16 Day Of Activism Against Gender Based Violence By NEW SPOTLIGHT ONLINE 7 hours, 26 minutes ago