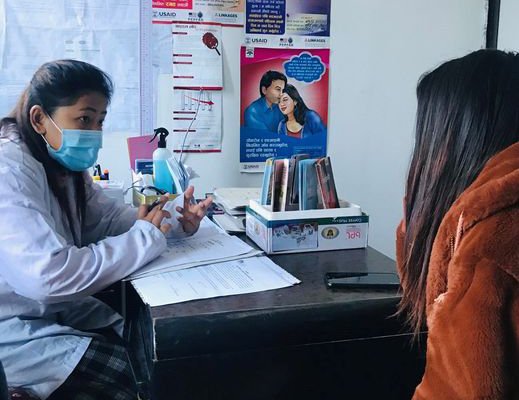 With support from the development partners like USAID, Nepal’s HIV Infection fell drastically in the last 20 years. As Nepal joins to celebrate the World AIDS day, this is a matter of satisfaction to all.

As the largest donor-supported Nepal’s health sector for almost seven decades, the U.S. expresses its happiness through social media.

“There has been a 67% reduction in new HIV infections and a 55% reduction in #AIDS-related deaths in Nepal from 2010 to 2021. Thank you to USAID Nepal for partnering with the Government of Nepal to support Nepal’s win in the fight against HIV/AIDS,” writes U.S. Embassy Nepal in its Facebook wall.

According to a report by RSS’s reporter Sharad Sharma, New HIV infections fell by 84 per cent in the past two decades in Nepal.

According to data unveiled by the National Centre for Aids and STD Control, Teku, the Ministry of Health and Population, new infections declined by 84 per cent in 2021 in comparison to 2000.

In 2000, 4,370 HIV-infected were found in Nepal and the number fell to 680 in 2021. As assessed by Centre director Dr Sudha Devkota, hunting for probable infection and effective medical interventions are considered the factors behind the improvement in infection containment.

The new infection rate is slowing down each year. Till the year 2021, the total number of infected was 30,000 and of the 0.12 per cent are adults and 45 are children under 14, the data shows. Likewise, 21,723 or 72 per cent are reeving antiretroviral therapy (ART). Dr Devkota sees the need of bringing all the infected into treatment procedures.

HIV infected continue to suffer social taboos and discrimination in society and it must be ended, according to Devkota. In 2021, 510 people died of HIV in the country and the figure was 1,765 back in 2007. The fatality rate in 2021 from the disease went down by 71 per cent compared to 2007. “This achievement was due to extensive medical intervention.”

Now, ART is available in 84 centres in 61 districts free of cost and community programmes against HIG infection have been implemented targeting mother-to-child transmission of HIV.

The most vulnerable groups are the people who inject drugs, sex workers including gays and third genders, and those in foreign countries who have unsafe sex. Of them, injection drug users, and gay sex workers are at higher risk. According to a national survey in 2020, injection drug sharing accounted for HIV infection at a 3 per cent rate.

Female sex workers share HIV infection at a 2.2 per cent rate, and gay sex workers at 6.2 per cent, according to a survey carried out in 2017-18.

Nepali migrant workers in India made up 1 per cent of the infection, a survey conducted in Province 1 and Lumbini and Sudurpaschim Provinces.

In a bid to eliminate the infection by 2030, the country has launched various programmes for the treatment and care of infected, affected and vulnerable groups as per the National HIV Strategic Plan 2021-2026.

The government has come up with a plan to identify and provide treatment to 95 per cent of infected people, getting undetectable viral load among the infected at 95 per cent, and decrease new infections by 90 per cent.

Going by the history of HIV infection around the globe, it was detected in 1981, according to the World Health Organisation. The number of infections has hit 84.2 million across the world. So far, 41 million people died of the infection.

It is said the world reports 4,000 new cases of HIV infections each day followed by two in Nepal.

December 1 each year is celebrated as World AIDS Day internationally and this year the Day was observed with the main theme of ‘Equalize’, calling for alleviating inequality and putting an end to the life-threatening disease 'AIDS'

Based on RSS reporting