New Data On Nepal PLHIV Stigma Index 2.0 Indicates The Need To Create Arespectful And Equal Environment For PLHIVs In Community And Workplace

New Data On Nepal PLHIV Stigma Index 2.0 Indicates The Need To Create Arespectful And Equal Environment For PLHIVs In Community And Workplace 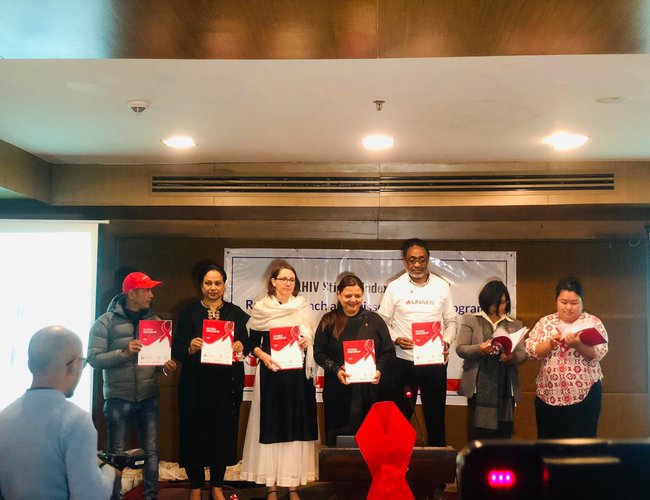 A new survey on Nepal PLHIV Stigma Index 2.0 indicates that though the societal/external stigma and discrimination towards People Living with HIV (PLHIV) is decreasing, a new area of concern is self-stigmatization. On the occasion of 35th WORLD AIDS Day, National Center for AIDS and STD Control (NCASC) and Save the Children launched the PLHIV Index 2.0 report at anevent.

Similarly, Stigma and discrimination by the health service providers at the health facilities have decreased by almost half compared to 2011 and denial of health services because of HIV status has decreased to 4% in 2022 from 7.3% in 2011.

However, the prevalence of stigma and discrimination is high specially among the youth below 25 years of age. Significant proportions of the PLHIVs are facing discrimination from the providers and have issues with disclosing their status as they fear breach of confidentiality. Irrespective of HIV status, stigma and discrimination is higher in key populations (KP) such as LGBTQI due to their sexual orientation. Many PLHIVs reported not disclosing their HIV status, especially at workplace, among peers or teachers. Disclosure of their HIV status without consent is common.

Hence, the research shows the need of evidence-based advocacy and awareness raising interventions in various settings including communities, health facilities, social and mass media platforms, and formal education systems to reduce stigma and discrimination towards PLHIVs and KPs. To reduce stigma and discrimination among young population and in workplace, a focused intervention is needed targeting the workplace setting, schools and colleges. Similarly, interventions are needed at the stakeholders’ level and in health facilities so that the identities of PLHIVs can be protected and they receive the environment of respect and value. This will ensure that their right to privacy is protected, and their consent is sought before disclosing their HIV status.

The PLHIV Stigma Index 2.0 was conducted in Nepal under the leadership of the PLHIV networks; NAP+N and NFWLHA and with the technical and financial support from Save the Children International Nepal and facilitated by an independent research organization the Center for Research on Education Health and Social Science (CREHSS).