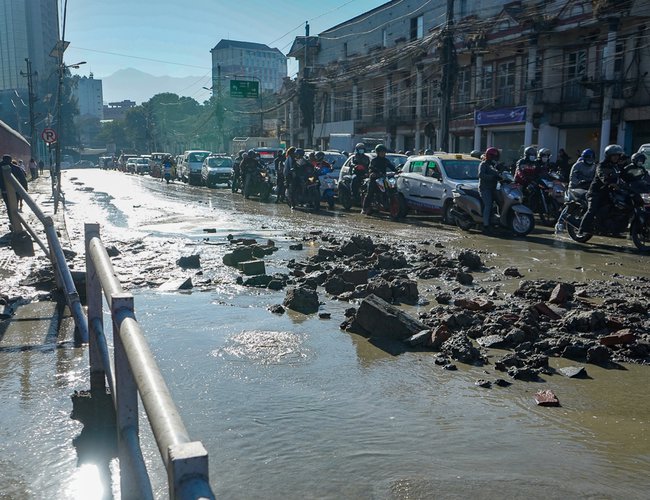 The burst of old drinking water pipe has created panic disturbing the mobility and vehicular movement of Kathmandu Valley.

Officials at KUKL argued that till the handing over of the system to KUKL they cannot do anything. They said that it is the responsibility of the committee to look all the system.

The traffic system as well as movements of the people was affected in a few city area of Kathmandu on Monday after a waterpipe of Melamchi burst in the Lainchaur area.

The area was flooded after excessive water leaked from the pipeline of the Melamchi Water Supply Project.

The road was inundated when the pipe of the project placed in the main road in front of Lainchaur’s Banquet building burst. Even some parts of the road collapsed due to flooding. It had severely affected the vehicular movement and caused difficulty for pedestrians in the area.

The Traffic Control Room informed that the vehicles were jammed for a long time in Tripureshwor, Old Bus Park area, Jamal, Keshar Mahal, and other areas.

Kathmandu Upatyaka Khanepani Limited had started distributing water in the city from Friday. However, water leakage was seen in other areas including New Road.