Embassy Of Israel In Nepal Observed Hanukkah, the Jewish festival of lights amid a function at the residence of ambassador of Israel to Nepal. 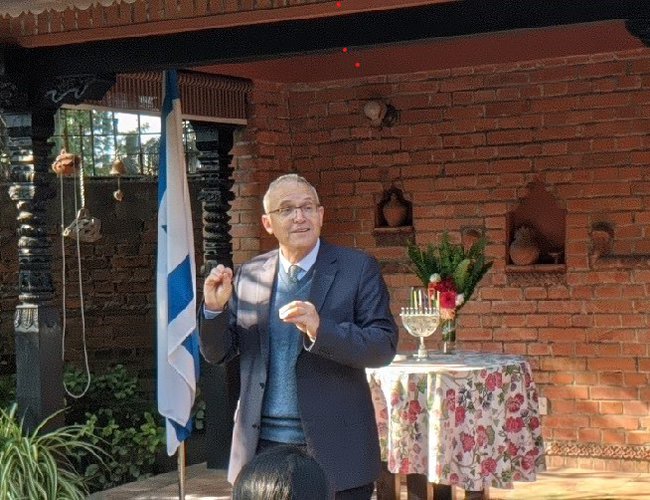 Attended by people from various walks of life including the members of SALON Clubm Hanan Goder Goldberger, Ambassador of Israel to Nepal, highlighted the importance of the Hanukkah in the life of Jews people.

Hanukkah commemorates the Maccabean (Hasmonean) victories over the forces of the Seleucid king Antiochus IV Epiphanes (reigned 175–164 BCE) and the rededication of the Temple on Kislev 25, 164 BCE. Led by Mattathias and his son Judas Maccabeus (died c. 161 BCE), the Maccabees were the first Jews who fought to defend their religious beliefs rather than their lives. According to I Maccabees, a text of the Apocrypha (writings excluded from the Jewish canon but included in the Roman Catholic and Eastern Orthodox Old Testament canons), Antiochus had invaded Judaea, tried to Hellenize the Jews, and desecrated the Second Temple in Jerusalem. Following the Jewish victory in a three-year struggle against Antiochus, Judas ordered the cleansing and restoration of the Temple. After it was purified, a new altar was installed and dedicated on Kislev 25. Judas then proclaimed that the dedication of the restored Temple should be celebrated every year for eight days beginning on that date. In II Maccabees the celebration is compared to the festival of Sukkoth (the Feast of Tabernacles or Feast of Booths), which the Jews were unable to celebrate because of the invasion of Antiochus. Hanukkah, therefore, emerged as a celebration of the dedication, as the word itself suggests.

Although the traditional practice of lighting candles at Hanukkah was not established in the books of the Maccabees, the custom most likely started relatively early. The practice is enshrined in the Talmud (Shabbat 21b), which describes the miracle of the oil in the Temple. According to the Talmud, when Judas Maccabeus entered the Temple, he found only a small jar of oil that had not been defiled by Antiochus. The jar contained only enough oil to burn for one day, but miraculously the oil burned for eight days until new consecrated oil could be found, establishing the precedent that the festival should last eight days. The early date for this story or at least the practice of lighting eight candles is confirmed by the debate of the 1st-century-CE scholars Hillel and Shammai. Hillel and his school taught that one candle should be lit on the first night of Hanukkah and one more each night of the festival. Shammai held that all eight candles should be lit the first night, with the number decreasing by one each night thereafter.

The celebration of Hanukkah includes a variety of religious and nonreligious customs. Like Purim, Hanukkah is a joyous festival that lacks the work restrictions characteristic of the major festivals of Rosh Hashana and Yom Kippur.

The most important of all Hanukkah traditions is the lighting of the menorah each evening. Also known as the Hanukkah lamp, the menorah recalls the Temple lampstand and is a simple or elaborate candelabra with eight branches plus a holder for the shammash (“servant”) candle that is used to light the other eight candles. One candle is lit on the first evening, and an additional candle is lit on each subsequent evening until eight candles are burning on the last evening. Olive oil was traditionally used for lighting the menorah, but it was replaced by candles, which are inserted in the menorah incrementally each night of the festival from right to left but are lit from left to right. A blessing is also offered while the candles are lit each night. The menorah was originally kindled outside the home, but it was brought inside in ancient times to guard against offending neighbours.

The Hanukkah observance is also characterized by the daily reading of Scripture, recitation of some of the Psalms, almsgiving, and singing of a special hymn. The liturgy includes Hallel, public readings from the Torah, and the ʿal ha-nissim (“for the miracles”) prayer. The Scroll of Antiochus, an early medieval account of Hanukkah, is read in some synagogues and homes. Along with the daily prayers, thanks are offered to God for delivering the strong into the hands of the weak and the evil into the hands of the good. The word Hanukkah in Hebrew also means “education,” and rabbis and Jewish educators try to instill in their congregants and students the notion that the holiday celebrates Jewish strengths, perseverance, and continuity.

There are also a number of nonreligious customs associated with Hanukkah, including festive meals, songs, games, and gifts to children. Potato pancakes (latkes), doughnuts (sufganiyot), and other treats fried in oil, which recall the miracle of the oil, are popular. Children receive presents and gifts of money (Hanukkah gelt), which is sometimes distributed in the form of chocolate coins wrapped in gold foil. Card playing is common, and children play a game with a four-sided top called a dreidel (Hebrew sevivon). On each side of the top is a Hebrew letter, which forms the initials of the words in the phrase nes gadol haya sham, meaning “a great miracle happened there.” In modern Israel the letters of the dreidel were changed to reflect the translation “a great miracle happened here.” In countries where Christmas rituals are widespread, some echoes of those rituals appear in Hanukkah celebrations. Some families, for example, exchange gifts or decorate their homes.

In contemporary Israel, Hanukkah is a national holiday, and students present plays, sing holiday songs, and have parties. Schools are closed, and menorahs are displayed atop such prominent buildings as the Israeli parliament, the Knesset. A highlight of the eight-day festival is an annual relay from Modiʿin to Jerusalem. Runners carry burning torches through the streets, beginning in Modiʿin. The runners continue until the final torchbearer arrives at the Western Wall, which is the last remnant of the Temple. The torchbearer hands the torch to the chief rabbi, who uses it to light the first candle of a giant menorah.