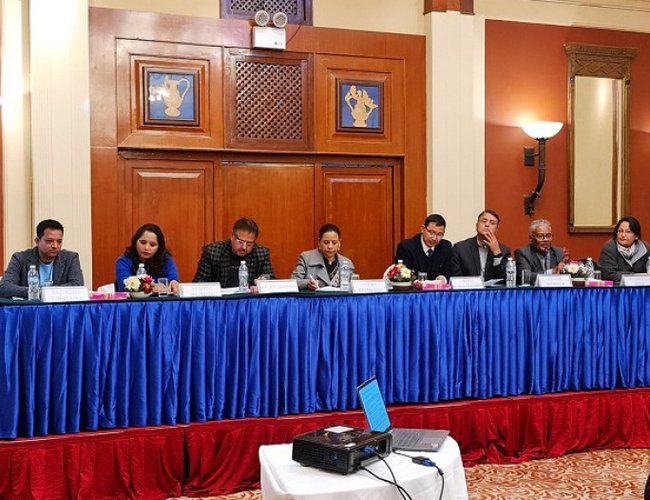 South Asia Watch on Trade, Economics and Environment (SAWTEE), in collaboration with The Asia foundation (TAF), organized a seminar on “Trade policy and economic diplomacy in Federal Nepal”. Findings of two studies on the topic were presented and discussed at the event.

Speaking at the inaugural session, Toyam Raya, Secretary, Ministry of Industry, Commerce and Supplies (MoICS), said that Nepal’s future trade policies must be formulated through proper and adequate consultations among all the tiers—local, provincial and federal—of the government as well as the private sector. Diplomatic missions play a vital role in promoting exports, he added.

Dr. Posh Raj Pandey, Chairman, SAWTEE, pointed out that while Nepal has accorded the highest priority to export promotion, even acknowledging the importance of promoting exports in the directive principle of the Constitution, the export performance in the past decade has been dismal, primarily because of poor supply capacity.

Dr. Paras Kharel, Executive Director, SAWTEE, said that as Nepal stands on the verge of graduating from the LDC category (in 2026), trade and economic diplomacy carry special importance in charting the post-graduation landscape.

Presenting the findings of a study, Purushottam Ojha, Former Secretary, MoICS, and Neelu Thapa, Researcher, SAWTEE, recommended identification and development of products along with the need for product and market diversification to boost Nepal’s exports. The study highlighted the need for technical support and capacity building programs and recommended strong coordination within the three tiers of governments for effective implementation of trade policies

Urging the policymakers to take advantage of the federal structure, Rajan Sharma, Former President, Nepal Freight Forwarders Association, emphasized on the need to allow subnational governments to play a role in enhancing the supply-chain.

Prof. Shambhu Ram Simkhada, Former Ambassador, highlighted the importance of focusing on improving structural and supply-side constraints to trade. He emphasized that focus should be on high-value niche products instead of mass production of low-value products for export.

Suraj Vaidya, Former President, Federation of Nepalese Chambers of Commerce and Industry (FNCCI), gave an insight into the challenges faced by the private sector in trade such as lengthy bureaucratic processes. He called for putting Nepal’s internal house in order, which he deemed a precondition for diplomacy to work efficiently.

The event saw the participation of current and former policymakers, trade experts, diplomats, researchers, academicians and journalists, among others.