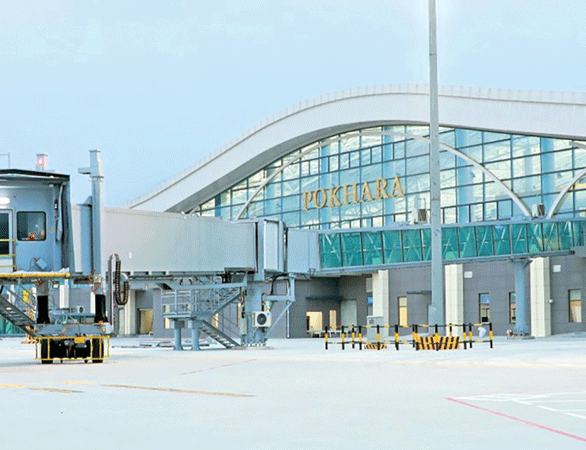 Prime Minister Pushpa Kamal Dahal Prachana will inaugurate the Pokhara International Airport (PIA) today. It is is coming into operation from Sunday, the first day of the New Year 2023.

Prime Minister Dahal Prachanda will inaugurate the aviation infrastructure in the lake city which is the capital of Gandaki province as well. Construction of the national pride project in Chhinedanda, 3km east of existing Pokhara Domestic Airport, of Pokhara Metropolitan City in Kaski district was completed at the cost of Rs. 22 billion. The project was constructed with the support of China while construction works were carried out by CAMC Engineering Company of that country.

Nepal's Cabinet had awarded the contract to develop the airport to CAMC Engineering as per the recommendation by the Ministry of Culture, Tourism and Civil Aviation while Export-Import Bank of China had provided the loan of US$ 215.96 million. The Ministry of Finance, and Civil Aviation Authority of Nepal (CAAN), the aviation sector regulator in the country, had signed the loan agreement with the Chinese bank.

The test flights at the PIA were conducted for a week a month ago. Thailand's Aero Thai had conducted the calibration flight from November 21 to 27.

The construction of the airport was completed in March 2022, and a virtual completion ceremony was organised during the visit of Chinese Foreign Minister Wang Yi on March 26. The CAAN had announced in August that the airport would be brought into operation from January 1, 2023.

US Under Secretary Nuland Pays A Courtesy Call On PM Prachanda By NEW SPOTLIGHT ONLINE 12 hours, 53 minutes ago