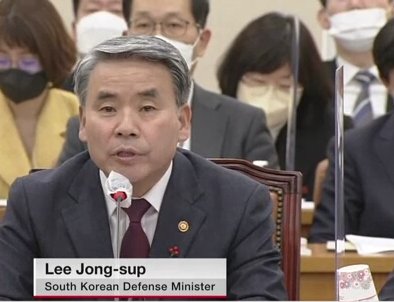 South Korean Defense Minister Lee Jong-sup has instructed senior military officials to continue to be on the alert against North Korea's provocations.

In an address to the plenary meeting of the Central Committee of the ruling Workers' Party, Kim called for the development of a new intercontinental ballistic missile. He also said North Korea needs to "exponentially" increase production of nuclear warheads.

Kim called South Korea a clear enemy in the speech.

At Sunday's meeting, the South Korean defense minister noted that North Korean drones violated the South's airspace on December 26. Lee said the North could carry out surprise provocations, such as another drone infiltration, at any time.

He said South Korea should sternly and strongly punish any direct provocation by the North.

South Korean President Yoon Suk-yeol spoke with the chairman of the Joint Chiefs of Staff by telephone. Yoon said the military should certainly punish any enemy provocations with a firm determination not to avoid going to war.

They reaffirmed that Pyongyang's frequent ballistic missile launches pose a grave and imminent threat to regional security and are a clear and serious challenge to the international community.

The officials agreed that Tokyo, Washington and Seoul will continue to work closely to enhance regional deterrence and make North Korea nuclear-free in line with UN Security Council resolutions.

Zelenskyy Meets With EU Leaders By Agencies 1 hour ago