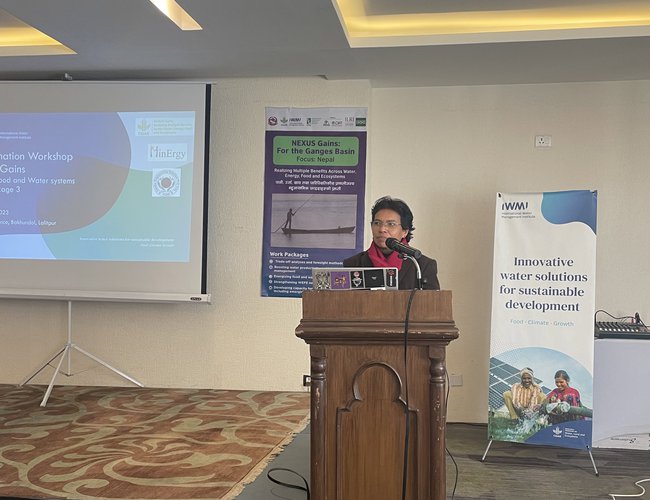 Promoting solar lift irrigation in Nepal's mid-hills, which is clean, gender-friendly, and simple to operate, can be a game-changer to increase agriculture production while reducing the fossil fuel consumption of lift irrigation.

As the study supported by IWMI shows that this is because the nexus of water, land, energy, forest, and bio-diversity is interconnected and essential to food and nutrition security as well as climate change adaptation and mitigation.

For the security of food and nutrition, economic growth, and rural life, it is essential to comprehend the Water, Energy, Food, and Ecosystems (WEFN) problems. They are closely related, according to studies.

Connecting a sizable number of SLRs to the national grid at a time when Nepal's electricity is heavily dependent on hydropower will also significantly support the mixed energy industry and ultimately help to reduce the use of fossil fuel.

The Solar Lift Irrigation Study was carried out by MinErgy, a pioneering private sector research organization specializing in renewable energy, as part of a package program for the International Water Management Institute (IWMI). Its objectives were to provide a thorough assessment for the stocktaking of solar lift irrigation projects in Nepal and explore the opportunities for grid connection of the schemes.

Similar to this, a deep tube well research in the Terai region aims to investigate the viability of creating Solar Irrigation Pump (SIP) prototype projects with various business models for water management and distribution.

The workshop, which included representatives from a range of government agencies, businesses, financial institutions, and NGOs, also aimed to close the gap between research and policy in the area of solar irrigation.

The Nexus Gains initiative Work Package 3 Dissemination Workshop was formally launched by Dr. Manohara Khadka, the national representative, and her colleagues. She emphasizes the value of the WEFE nexus in linking systems, sustaining rural livelihoods, and creating synergies.

Dr. Khadka asserted that the intersection of gender-based policy and technology can be beneficial. She has been a prominent advocate for technology that is friendly to women.

Workshop for dissemination of the Nexus Gains Initiative's Work Package 3's findings on solar lift irrigation and the viability of community-based water business models for polarizing deep tube wells that are already in operation.

"We are thrilled to let you know that our 2021 Annual Report is now available. All areas of international development and environmental science can be connected through water, "Dr. Khadka remarked. "We are also conducting research to comprehend the federal, provincial, and local watersheds and to boost water utilization to increase food production without affecting the climate."

Dr. Khadka said that water, land, energy, forests, and bio-diversity are highly interconnected systems that are critical to food and nutrition security, livelihoods, climate change adaptation and mitigation and environmental health as well.

In her statement, she said that climate change and other anthropogenic activities will increase the pressure on water, land, energy, forest and biodiversity resources and hinder the health limits to achieve safer energy and food security. She said that the study provides a comprehensive assessment of the stocktaking of the SLI project in Nepal from technical, institutional, financial and governance dimensions and explored the possibilities for grid connection of the schemes.

Shisher Shrestha, the National researcher at IWMI, gave an overview of the research conducted under Nexus Gains WP3. He highlighted the need to scale up Solar Irrigation through a sustainable business model.

Suyesh Prajapati, Program Director of MinErgy, provided a project overview and methodology of the study. He said that the study focuses on the challenges, viability and contribution of SLI in the rural life of mid-hills. "We have made a study of 39 districts based on secondary data. We have adequate information on SLI," said Pajapati. 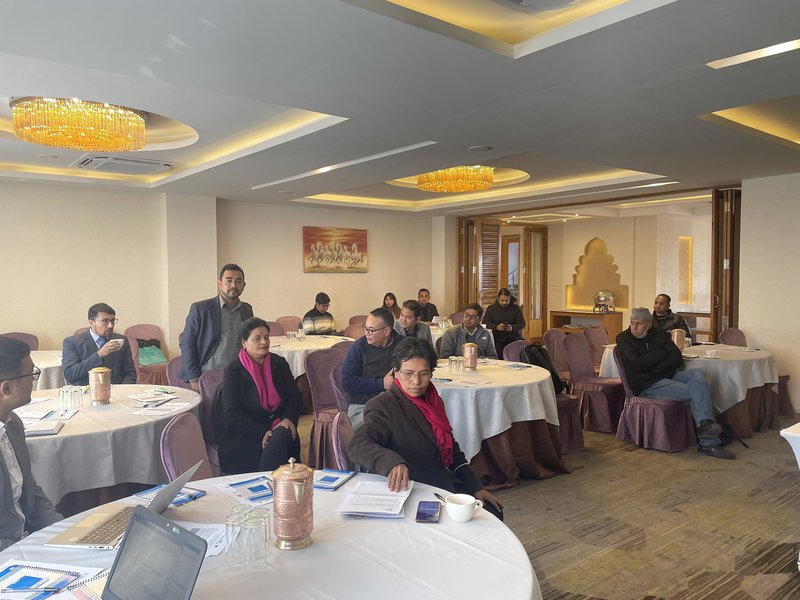 According to him, the study's main emphasis is on the difficulties, viability, and contribution of SLI to rural life in the mid-hills. "On the basis of secondary data, we conducted a study of 39 districts. We have sufficient knowledge about SLI,”said Pajapati remarked.

According to Prajapati, there exist databases on 317 different varieties of SLI and a lot of work has already been done in the field. However, there is no information about the number of heads or the sizes of the service delicacies. According to him, 176 SLIs were studies with 2kW or more and less than.

Prajapati said that a lot of work has already been completed in SLI and there are databases on 317 various types of SLI. However, no information is available regarding the number o heads and service delicacy sizes. He said that 176 SLIs were studies with below 2kW and over.

We conducted a case study of 7 systems, with 3 functional and 4 non-functional, in the Surkhet district of Karnali Province. He said that in some cases there is no basic information about the user committees. All three governments, federal, provincial and local are promoting the SLI. Local levels are dedicating a substantial amount of money to SLI and local-level governments want many more.

He said that the study team discussed 6 systems out of 7 seven. He said that the majority of non-functional SLI is in hilly areas. The three SLI-provided Bheri Babai Diversion Multipurpose Projects in the Bheri Ganga Municipality of Surkhet successfully operated benefiting 200 households. The user committee is successfully operating charging the tariff for the use of water and the annual maintenance charge.

She said that all SLI is not functioning well. However, those SLIs, which are functioning, have immensely contributed to enhancing the enhancement of people by increasing production.

She also said that the SLIs are also reducing the import of diesel and helping women not to travel to urban centers to bring diesel to operate the pump set.

In her policy brief presentation, Usha Maskey Manandhar of MinErgy briefed about the policies related to SLIs. She said that in the context of NDC's commitment and SDGs, the use of SLI is important to reduce emissions.

As the irrigated command areas have access to the local market, farmers are making the money by producing and selling the vegetables. However, local people destroyed an SLI plant in the area as it was sent by the project without people's consent.

Under the theme of Technical Sessions II, the theme was a Feasibility Study of Community-based Water Entrepreneurship Business Models for Solarizing existing deep tube wells, expert presented their views.

The studies provide a comprehensive assessment of stocktaking of solar lift irrigation projects currently undergoing in Nepal from technical, institutional, financial and governance dimensions. Exploring the potential for the grid connection of the schemes, the study also highlighted the benefits and use of over 70 percent of energy to generate additional benefits to the community and contributions to the national power mix.

Although the study is a small one, it shows how water, energy and food security nexus) are necessary for the benefit of human well-being, poverty reduction and sustainable development. 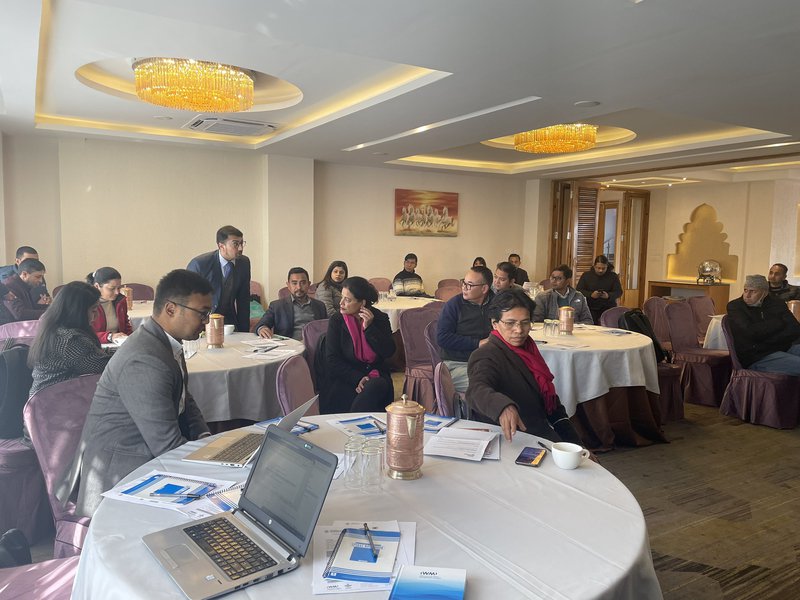 In fact, agriculture is the largest user of freshwater making it responsible for 70% of total global withdrawal, while more than one fourth of energy used worldwide is an input for food production, distribution, and use. Similarly, food production and supply chain simultaneously utilize approximately 30% of the total energy that is used globally. In this regard, the recent study conducted with the support from IWMI will contribute to Nepal to decide the future policy on SLIs.