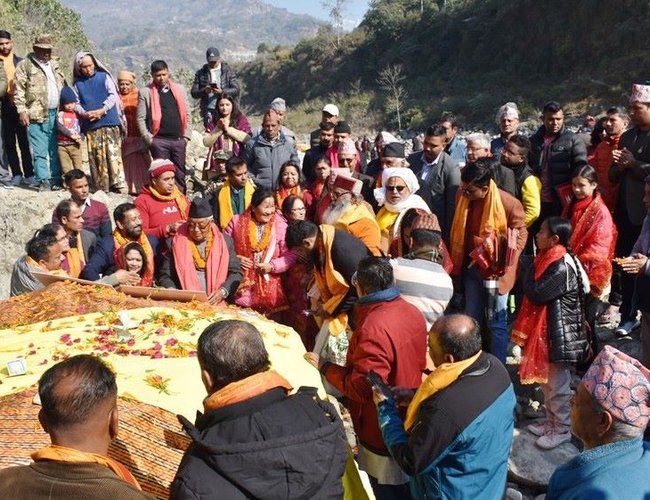 The stones (Shila) of Kaligandaki, which are to be taken to Ayodhya, a famous Hindu religious site, to carve out idols of Lord Ram and Sita were worshipped on Sunday.

Two stones identified on the banks of the Kaligandaki River in Beni Municipality-6 Galeshwar area have been worshipped according to the religious customs.

The stones of the Kaligandaki River, which originates from Damodar Kunda in Mustang and flows through Galeshwar, a famous religious place in Myagdi, will be taken to Ayodhya in India and used to make the main idols of Lord Ram and Sita.

The worship was performed on Sunday after observation by a high-level team. Mayor of Beni Municipality KC said that the stone of Kaligandaki River is going to be taken to be placed as the main idol in the Ram Temple, which is under construction in Ayodhya. A team of geologists, lithologists, technicians and experts spent two weeks identifying two suitable rocks in the Kaligandaki.

The stone was given as a gift. Nidhi, leader of the Nepali Congress and stone gift coordinator, expressed the belief that taking the stone of Kaligandaki located in the Galeshwar area to Ayodhya in India will strengthen the religious and cultural relations between Nepal and India.

Nidhi said that after India expressed its desire to take Kaligandaki’s stone to mould the main idol of Ram, the process of sending the gift to Ayodhya on behalf of Nepal was coordinated by Nidhi.

The Gandaki Province and the federal government have decided to send a gift according to the correspondence from India. Mayor KC said that the process of handing over two rocks of 16 and 18 tonnes, named calcite and quartzite, which were identified by the expert team to be taken to Ayodhya, has been started.

It has been confirmed that the two rocks named Devshila will last more than 1,000 years. The rocks were identified and the measurements checked under the leadership of Bhojraj Neupane, Deputy Secretary of the Ministry of Education, Science and Culture of the provincial government, Pankaj, Secretary of the Ram Temple Construction Committee, Navraj Neupane, Vice Professor of Western Engineering Campus Pokhara

Makar Or Maghe Sankranti 2023: The Festival Of Surya (Sun) By NEW SPOTLIGHT ONLINE 2 weeks, 5 days ago