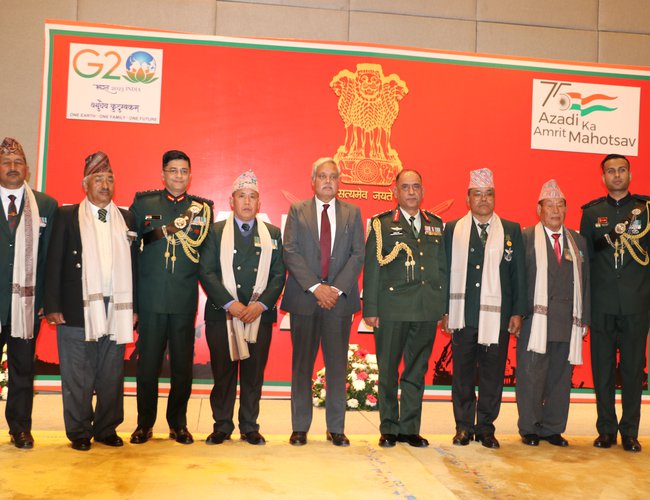 Defense Wing, Embassy of India in Nepal hosted a banquet on the occasion of the 75th Indian Army Day.

Chief of Army Staff of Nepal Army General Prabhu Ram Sharma, Honorary General of Indian Army, was the Chief Guest at the function. The event was also attended by former Army Chiefs of Nepal, serving and retired army officers, officers from the diplomatic community, and officials from the government of Nepal and the press corps.

At the event, Naveen Srivastava, the Ambassador of India to Nepal, recalled the lasting bond between Indian Army and the Nepali Army that binds the two countries. Expressing gratitude for the selfless service and sacrifice of Nepali soldiers in Indian Army, he reiterated India’s commitment to the welfare of Indian ArAmy pensioners and their families residing in Nepal.

COAS General Prabhu Ram Sharma conveyed his greetings to General ManojPande, COAS Indian Army and Honorary General of the Nepali Army, on the occasion of the 75th Indian Army Day& congratulated General Anil Chauhan, on being appointed the second CDS of India.

Malaysian Home Minister In Nepal By Agencies 23 hours, 21 minutes ago