An estimated two million Nepali people, perhaps, even more, since Nepal shares an open and porous border with India, work abroad, many of them getting to the destination through unrecognized and often illegal travel. 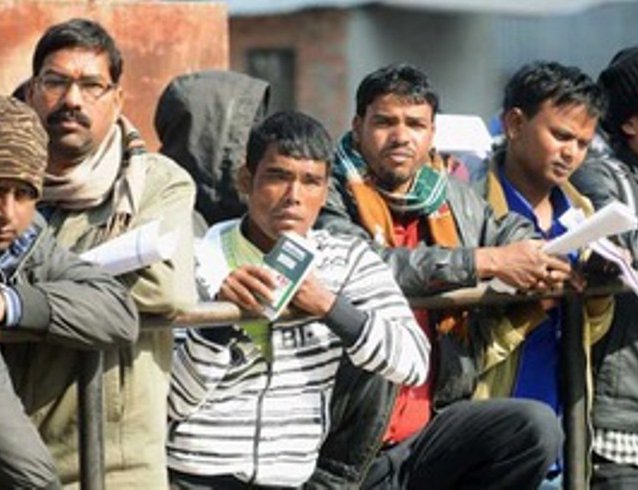 An estimated two million Nepali people, perhaps, even more, since Nepal shares an open and porous border with India, work abroad, many of them getting to the destination through unrecognized and often illegal travel. Failure to create new jobs, maintain old jobs by running industries, or provide high salary by the state, in addition to political instability, has motivated about 1500 people to leave the country every day in order to improve their living standards. Majority of these people are young, barely literate, and work in the unskilled or semi-skilled sector. A large chunk of this migrating population toil in the Gulf, where they are mistreated, exploited, and cheated and are denied basic fundamental rights, which, on paper is guaranteed to each individual. Huge amount of money is sent back as remittance every year, almost making about 29% of the national GDP. This may not be a correct estimate because not all money is sent legally, so it could be way more than the government's estimate.

Despite migration for employment bringing money, lots of families are rendered helpless when the sole breadwinners of the family end up coming back as corpses in coffins. The rate at which people die is alarming. These are healthy people, often young, who pass through various health tests to be able to be eligible to work abroad. Surprisingly, the workers have a normal day like any other day and go to bed to never wake up again. This is believed to be caused by various reasons like insufficient nutrition and improper diets, harsh climatic conditions, consumption of toxic alcohol obtained from illegal markets, dehydration – apparently Hindus are not allowed to use the same restrooms as Muslims so they don't drink water to avoid urinating, and negligence on the employers' part. There is no procedure for autopsies so they are passed as dead by natural causes or heart attacks. The airplanes supposed to carry back the bodies do not do so until they are provided with death certificates as proof. The certificates are mere formality and hardly thorough so when the bodies arrive home the process gets cumbersome for the family members and drains them of whatever money was sent home in the first place. Some people end up not dying but get their body parts permanently severed, leading to a lifelong paralysis or coma, unable to work or even perform their daily routines with ease. They become dependent on their family members whose lives they wanted to change for the better.

Even if they make it without dying or getting paralyzed, the workers do not lead a very comfortable life. The way the employers have control over them, with or without the kafala system, almost resembles slavery. Kafala system is where the employers pay for the visa and airfare of the employees. The workers have to fulfill their employment tenure and conditions as per the contract in place or get jailed. The women who work as domestic help endure worse. They are made to work continuously for hours without so much as a break, and are, oftentimes, physically and sexually abused by multiple people. The government once tried to put a ban on women going out to work as domestic help. However, it was called off because it was discriminatory and increased migration through illegal channels but certain provisions like age restrictions and working days were made in order to ensure at least something. The only motivation often stated by the workers is the thought of impoverished life back home and the huge debt they took on themselves to be able to change that. Sometimes even that fails because a lot of them try to commit suicide – which is sadly the only way out of this vicious cycle.

At the same time, there are middlemen and brokers who make a ton of money by banking on people's misery, naivety, hard work, and lack of sensitization, who take up to five months' wages from the workers.

The migration pattern has shown that a lot of males travel abroad for work in comparison to females. This has left a skewed sex ratio, especially in villages across the country and brought in a lot of social and cultural changes. This directly impacts on various aspects, like agricultural work is minimum and a lot of land is barren. This has lowered the agricultural productivity, increasing the import of agricultural products. Females take on jobs that usually males performed, including but not related to attending and participating in funerals, which was previously a taboo. They also head households and manage finances in the absence of males, which is of course different than the status quo in patriarchal societies in Nepal. However, sexually transmitted diseases have been on the rise along with promiscuity. Divorce and separation rates are also known to have risen. Fertility rates have declined over the years. The social changes are profound but it is up to us to decide whether we need empowered women in the absence of men. It is of utmost importance that both men and women make up a society otherwise it gets distorted.

Nepal has been portrayed internationally as a country that exports people in huge numbers every year. One of the major causes is because a large number of less educated people are charmed at the idea of making a lot of money. In this process of considering it lucrative, they do not realise how the ignorance sets them back and only adds to their misery. The government provisions like training and briefing are not taken seriously and so many other procedures are faked in exchange of some money. A lot of problems are unsolvable but this is not one of them. For example, a lot of people in India also work in various countries as labourers but their foreign ministry has their backs and it is extremely responsive and helpful at times of crises. Thus, it is also up to the government to make it safer and ensure provisions are implemented if the government values our lives at all.

IFC Appointed Riccardo Puliti As Its New Regional Vice President For Asia And The Pacific By NEW SPOTLIGHT ONLINE 3 days, 23 hours ago