Although the role of private schools is highly criticized, recent results have shown that they are enhancing Nepal's quality of education. However, disparity of education in private and public school is growing. The time has come now to think to make 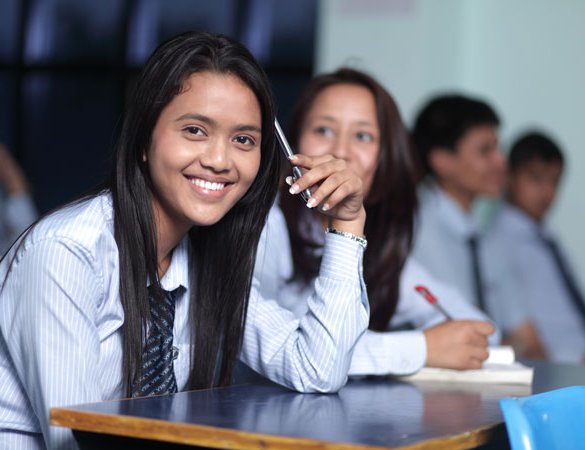 Sanjana Wagle, 15, a student of Shanti Barsha Private English Boarding High School of Damauli, 150 Kilometer of west of capital of Kathmandu, secured 93.37 percentage in SLC education. She is reportedly second topper among girls.

With hundred percent results in the SLC, Wagle's school showed the difference between private and public schools. Although 41.57 percent passed out in SLC 2069, the percentage of government schools dismal.

"This year's SLC results were very unfortunate. Out of 100 students enrolled in government primary schools, only 3 students passed out SLC. The dropout at class five is 50 and there remain just 13 at tenth grades. This indicates that there is just 27 percent pass out in government schools. This years' pass percentage of private school is 87 percent," said Dr. Baburam Pokharel, president of PABSON.

According to a recent study, out of 100 students, who are enrolled in government schools, only 17 students reached in class 10. Out of them, only 3 students passed School Leaving Certification (SLC Exam. This year's SLC results raised the questions about the government investment in education sector where the government invests over 37 billion rupees annually.

"We are spending about Rs.12000.00 for a primary school children. How can we expect a quality education in such a low investment? We need to develop minimum standard of management committee and performance of the teachers.  There is the need of a huge cost for improvement of quality," said Dr. Som Lal Subedi, outgoing secretary at Ministry of Education and now secretary at Ministry of Science, Technology and Environment.

Around this time of year, the School Leaving Certificate (SLC) examination results are the epicenter of every current Nepali 10th grader’s life. If a student cannot pass this exam, they will not be qualified for further studies. In Nepal, high school ends at 10th grade, thus making the final exam immensely important and giving it the cognomen ‘the Iron Gate’.

There are different exam-boards available that can substitute for the SLC. However, Nepal’s national education board exam is the 10th grade SLC test. Krishna Sharma, a parent says, ‘The SLC is well known in Nepal. Almost all generations have taken it, and there is pride in a student getting good marks. SLC exams are important.”

Students are required to take 5 core classes and examinations, with a few more optional classes offered. The grades fall into 5 categories, with the highest one being Distinction (above 80%) and the lowest being 3rd division (32%). If any student does not score above 40 points (less than 32%), it is acknowledged that they failed.

According to the SLC administrators, the exam was first taken in 1934. Since then, many changes have taken place. For example, previously the exam covered the syllabuses of grades 9 and 10. Currently, only the 10th grade curriculum is taken into account within the exam. Hitherto, once a student fails in the SLC, he would have to wait a whole year before being permitted to take it again. That rule has changed. If a student fails 2 or less subjects, he or she is allowed re-take the exam in a few months. This year, all failed students can repeat the assessment from the 4th of August to the 11th of August.

The Office of the Controller of Examinations is under the Ministry of Education, and its main function is to manage and control the SLC examinations. They have currently passed a rule, which states that any student failing because of 5 or less marks, they will be eligible to receive grace marks in order to pass.

Even with the simplification of the SLC board exam rules and regulations, many students have failed to pass in the recent years. In the last 4 years, the percentage of students that have passed has declined enormously.

In 2009, out of 342,632 examinees, 69% passed. This year, 547, 165 individuals applied to take the exam, with 20,105 leaving because they were illegible to take the exam. In April, 511,165 students appeared ready to take the exam, and only 176,253 passed. In the recent years, the insufficiencies of the results have become blatant to the public eye. For example, in the Sankhuwasabha district, in all 9 schools, not even one student passed the SLC.

Why are so many students suddenly failing? Does it have to do with the immense amount of pressure put upon them? Are the exams getting harder? A current SLC student, who would like to remain unknown, says, “Most people did not do well this year because it is hard. The exam is hard and there is so much pressure, and we can not focus.”

When a person fails the SLC, society either considers them incompetent or lazy. This type of attitude gives many failed students anxiety and self-disappointment. The Nepalese society considers the SLC exam with a lot of importance. So, what does a student do when he or she fail the so-called most important exam of their life? Most students that completely fail the exam wait anxiously till the next year to re-take it. However, some take it a little further. This year, after the SLC results came out, 7 girls from different Nepali towns and cities committed suicide. They had all failed.

There are many things that the society and the parent of SLC taking students need to be careful of. A little more pressure or a malicious quip about grades could be the reason for these students committing such a crime. The stress and anxiety that comes with exams triple when you fail. Anish, a student, says, ‘Yes, the SLC is stressful. Yes, it’s a lot of work. Yes, if you fail it will be horrible; however, it’s no reason to kill yourself. We need to prevent these suicides that aren’t even necessary.”

Even after the results come, students are frazzled and stressed because now they will have to apply and then get into another school or ‘college for higher studies. They have many choices ranging from +2 to the A levels to the IB board. However, most Nepali students attend +2 schools. Thus, it is extremely important to improve the quality and the curriculum of these schools. Currently, they are not fit to compete internationally.

Also, a problem for SLC students is getting into a school. Schools have begun to advertise their college through the newspaper and other such forms. The number of +2 colleges is growing annually.

From, Trinity to Whitehouse, students has a large array of choices.  How do students choose? Mr. Sharma, as a parent says, “There are a lot of choices, but everybody wants to send their child to a school with a good reputation. For example, St. Xavier’s’ college.” In a well-known college, like St. Xavier’s, the competition is fierce. A lot of students have a hard time securing a seat. Some students don’t even get into one college causing them to either work, or look for a higher-level education substitute.

Once a student manages to get into a school, they must choose their stream. They have a choice between humanities, science, or commerce. An abundance of students still are not sure of what subject to choose and this leads to a lot of difficulties. Anish commented, “It’s hard as students to choose subjects to study that we’re not even sure we want. What if we change our minds?”

In the last couple of years, there has been talk about either changing the SLC board to a more student friendly one, or cutting it out of Nepal’s education system all together. Anish says, “The SLC shouldn’t be cut off because that’s the climax of a person’s education in Nepal. Abroad, graduating from 12th grade is a big thing, in Nepal, graduating 10th grade is.” Sharma agrees, “They could make the board student friendly, but the SLC should stay.”

Resignation of Prime Minister Padma Shamsher and the Fate of his Constitution By Dr. Bipin Adhikari 2 weeks, 4 days ago

Resilience And Poverty In Kathmandu: The Story Of An Encounter By Benoît Clémencin 2 weeks, 5 days ago