The streets of Kathmandu are overflowing with life, both figuratively and literally 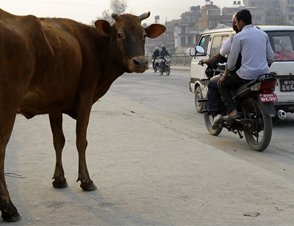 The streets of Kathmandu are overflowing with life, both figuratively and literally. With the air heavy with the scent of street food, motorcycles scurrying through a dangerous maze, and people dodging the bullet like cars, there is one thing that stands out. The street animals of Kathmandu vary from one another in many, many different ways. Yet, whether it’s a cow, monkey, or dog, they all have similar problems. BJ Sharma, a vivid walker, says, “I think the number of animals on the streets has reduced through the years, but the animals look sick these days. The dogs especially, all of their ribs show.”

Street animals are just like other animals, except for the fact that they have a very hard time surviving. They face challenges that most animals, and even humans do not face today.  Whether it be stoning from shop owners, or plain starvation, life is difficult. They are not protected from rabies, colds, or any other diseases. An unidentified fruit shop owner says, “If we don’t hit the dogs, they touch the fruits and people won’t buy them.”

There are hundreds of donors and organizations to stand up for every other cause, yet there are only a few that stand up for these animals. The Kathmandu Animal Treatment Center (KAT Center) is one of the few. It is a non-profit organization created to serve and protect Nepal’s street animals, especially dogs. Its main goal is to reduce the number of street dogs, and make sure the ones that are still on the streets are safe and healthy. As the KAT center says, “more than 20,000 dogs live on the streets of Kathmandu, Nepal, and many suffer from starvation, infected open sores, mange and other injuries and illnesses.” KAT aims to help these dogs through Animal Birth Control and rabies vaccinations, public education, and by rescuing and treating sick hounds. Over 200 people acquire rabies from dog bites every year.

Through questionnaires, the Animal Welfare Network Nepal discovered that much of the population is wrongly informed regarding street dogs. The results were astonishing. 99% of the people interviewed considered street dogs to be a problem, while 10% said that in order to control the street dog population, these misplaced hounds should be killed. 12% of the people questioned confessed to throwing stones at dogs.

With thousands of street dogs looking for loving homes, it is peculiar that many Nepali locals purchase foreign hounds. Many outsiders, however, adopt street dogs as pets. Phurba Dolma has been a dog owner for 12 years. She has 3 dogs, of which two of them are Tibetan mastiffs and one is of mixed breed. As a native Nepali, she thinks that street dogs would make wonderful pets, “Adopting a street dog is a double win. You have the dog’s loyalty, and the dog has your love.”

Dolma goes on to explain why most Nepalese people would rather own a foreign pup, “People buy foreign breeds to show off in the society. If you have a Japanese dog or something, it shows that you are rich enough to import an animal.”

Most foreign dog breeds are available in kennel clubs, while street dogs are available in organizations such as the KAT Center. Mt. Everest Kennel Club is located in Baneshwore. It sells many foreign pups, ranging from the Labrador to the German shepherd. The most popular breeds seem to be the Lhasa Apso, the Labrador, the German Shepherd, and the Japanese Spitz.

While purchasing a dog from a kennel, the price shall range from Rs. 6000 (Japanese Spitz) to 17,000 (Labrador). When a person takes in a dog from the KAT Center, it is free. A street dog is already used to Nepal’s polluted environment. It will thus live longer. Foreign dogs are not used to the climate, and adapting may be a problem.

With Kathmandu overflowing, with dogs and people alike, bringing in new breeds from outside may not be a good idea. Like Sharma says, “When we have so many dogs here, why should we bring in more? They disrespect the ones that are Nepali, and love the westerner’s dogs. Dogs are loyal, and Nepal’s street dogs need the love.”

Nepal To Continue Lockdown Till April 15 By NEW SPOTLIGHT ONLINE 13 hours, 40 minutes ago

No New Cases Of Coronavirus Infection In Nepal On Monday By NEW SPOTLIGHT ONLINE Apr 06, 2020

The Failure To Resolve The Crisis Could “Set The World On Fire”: Henry Kissinger By NEW SPOTLIGHT ONLINE Apr 06, 2020