Talks Broke Due To Big Four

After breaking out from the negotiations, CPN-Maoist leader Mohan Vaidya Kiran spoke to New Spotlight on the party’s future strategy 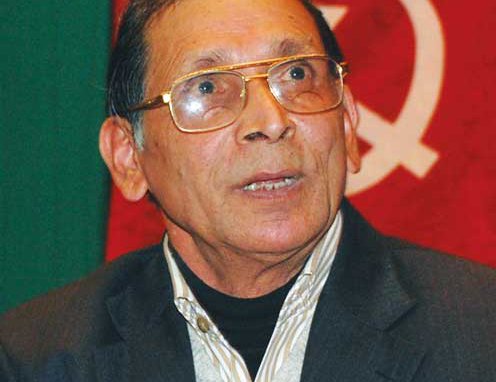 As the negotiations have broken down, what strategy does CPN-Maoist have now?

It is unfortunate that the negotiation was broken down because of the autocratic and dictatorial behavior of the four-party syndicate. Despite our commitment to elections, they suddenly pulled out from the negotiations. Now we have no option other than to call a mass agitation or bow down before the dictatorship of four parties.

How do you respond to the November 19 CA elections?

Four parties and the government are saying that your party does not have enough strength to disrupt the polls and they can contain your workers. How do you look at this?

The time will tell who has the strength and who does not have. When we started the People's War in 1996, three major political parties and Nepal's security agencies made similar comments. We were able to establish our strength in 2006.

What plan do you have now?

We have been conducting nationwide training programs to our party workers. We are also mobilizing our volunteers so that we can prevent the voters from going there.

Will voters listen to you?

No countryman will go for poll if it threatens sovereignty and independence of the country. We will launch nationwide campaigns against the elections.  Nepalese are proud of their independent and sovereign status and they will never cast vote while knowing that it will push their country into a colony.

The government, leaders of four parties and Election Commission have made it clear that they cannot tolerate any effort to disturb the elections. How do you respond if they attack your party workers?

If they use force, we will retaliate. In that condition, the country will be pushed into another round of violent conflict. The recent statements of leaders of political parties and ministers indicate that there will be more violence in the coming days.

Do not you think that your action is against CA elections?

I have been saying repeatedly that we are not anti-elections. CA is our agenda and we want to make the CA elections meaningful. We have been opposing the modalities of holding the elections. The need is to have participation from all the parties. It is the duty of four parties to create conducive environment.

It is reported that you are meeting the leaders including Prachanda and Narayankazi Shrestha of UCPN-Maoist. Don't you think the possibility of broader alliance with UCPN-Maoist?

I have been meeting all the political leaders including Nepali Congress leader Sushil Koirala, Sher Bahadurji and UML leaders Madhav Kumar Nepal and Bam Dev Gautam. I met UCP-Maoist leader Prachanda and Shrestha but the meeting had nothing to do with the unification process. It was just for political negotiations.

As you met UCPN-Maoist leader Prachanda at the last minute, just a few hours before breaking the negotiations, does it have any connection in breaking the news?

I was invited by Prachandanji to find out solutions to the present political stalemate. We discussed the matter in length about the possibility of our party joining the elections.  We were told of the possibility of holding all party roundtable conference, but not about breaking the negotiation. I was shocked when my colleagues informed me of the decision. Actually, we were expecting to have a certain breakthrough.

The negotiations broke down because of your rigidity. What do you say?

We were very much flexible on the agenda. We have not broken down the negotiations, the leaders of the four parties are responsible for this.