On My Dolphin’s Death

The population of the dolphins, however, has been declining each year due to floods, intensive fishing, construction of dams and bridges and adoption of various agriculture practices in the region 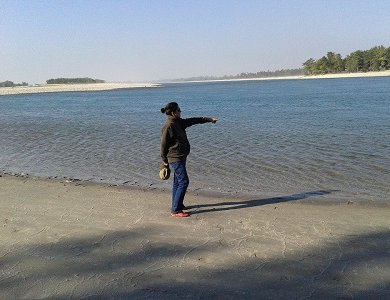 The Ganges river dolphins are among the most endangered of all the world's cetaceans at high risk of extinction from habitat loss. Known as Platanista Gangetica, they are indicators of a healthy aquatic ecosystem. These dolphins survive only in fresh water. They hunt by emitting ultrasonic sound. Their females are larger than males and give birth once in 2 or 3 years to only one calf. They cannot remain submerged in water for a long time – that is, they come on surface every few minutes to breathe. The Ganges river dolphins were officially discovered in 1801.

A record number of about 20 of these dolphins from Karnali were sighted in Lalmati, Mohana and Geruwa some time ago. The population of the dolphins, however, has been declining each year due to floods, intensive fishing, construction of dams and bridges and adoption of various agriculture practices in the region.

River dolphins in Karnali show us the prospects to develop eco-tourism centres in the region, mainly benefitting the Bardiya National Park. For that, priority needs to be given to protect these beautiful endangered mammals, which are found rivers of the Bardiya National Park. Dolphins in  Karnali, however, are facing serious  threats of extinction. We find these endangered mammals being killed each year. In December 2013, a male dolphin was found dead at Lalmati.

I was obsessed with the awesome stunts a big dolphin displayed while I was at Karnali Lalmati at the end of November 2013. I am scared if that particular dolphin got killed recently, along with 3 other calves.

I vividly recall my eyes glued to him as he was with me for more than an hour along with 3 other  calves sighted at the same spot. They were playing so peacefully, as if the territory belonged to them, and jumped higher from the surface to take the breath.I felt bad that we had forgotten to take our camera but we still managed to capture the awesome animals with the cell phone.

As it is well preserved, Bardia  National Park is known for fresh tiger paws everywhere, at the bank of beautiful Karnali river. Sighting the mesmerizing dolphins which were enjoying the nature were the best moments of my life. I wished if I could stay at Lalmati admiring these beautiful creatures forever.

On my way back, it struck to me that I must contribute a bit to preserve these endangered species, which are happily sheltering in our region. But soon after I came to Kathmandu, I came to know that one of the dolphins was found dead in Lalmati. That news in the first week of December 2013 broke my heart.  I felt terribly sad.

I wanted to find out more  about it. I made enquiries to confirm the news. The bitter truth was ''YES, IT WAS SAD END OF MY DOLPHIN. IT WAS FOUND DEAD IN LAMATI KARNALI RIVER WITH UGLY SCARS OF CUTS AND WOUNDS. Right now it is kept in NTNC aquatic museum at Sauraha. The confirmation made me only sadder.

It is high time the concerned ministry along with the national park authorities and others concerned worked jointly to preserve these endangered dolphins from extinction. They must adopt immediate measures to stop such brutal killings of the rare mammals of our region.

‘Anything Goes’ First By Hemang Dixit 4 days, 23 hours ago

How Can The Problems Of Koshi Region Be Addressed Through A Nexus Perspective? By Pratik Poudel 4 days, 23 hours ago