Not only Kathmandu, but all places of the country are increasingly facing the problem of water 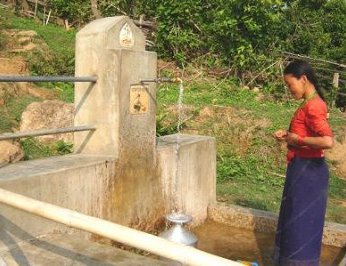 "We used to walk four-five hours a day to bring water from the river. The river was polluted. People cremated dead bodies in it. Since there was no option, we were compelled to drink the polluted water.  During the rainy season, the situation used to be worse. The situation has changed thanks to the community managed new water tap nearby," said Kamal Rai, a resident of Dahal Dada village of Udayapur district.

"After the completion of the water tap under our management, it not only saved our time but also reduced the water borne diseases drastically in our locality," said Padma Narayan Shrestha, a resident of Danda Gau of Udayapur.

These are just two instances. People in the district in general have been facing such problems. Although Gurudham village of inner terai district of Udayapur to Lalpur village of Siraha lie between two rivers, Kamala and Balan, access to hygienic and safe drinking water is lacking. Out of 18 VDCs in Udayapur, only a few VDCs have the drinking water projects.

Lalpur Water Plant has been supplying water to wards 2, 3, 4 and 5 and people of other wards had to fetch non-hygienic water from Saatpatre River. The water plant supplies drinking water free of charge but it charges the money if the water is used for irrigation purposes.

''Drinking water is free. However, we charge only for the electricity bills used in irrigation as Rs.100 per month. In ward no.5, ninety households are depending on this single well. During the period of load shedding, we don’t have any choice except going to fetch the water from Gurudham."

Due to various reaspms, fifty percent of water sources have been already dried up in Gurudham and Lalpur, where more than one lakh population lives. "During the spring, we hardly get a chance to fill up a bucket of water. We are much worried how to survive spring," said Thapaliya, who also works as an editor.

In 2013, June, V-WASHCC had organized a committee meeting on which it affirmed to separate 60% budget on water and sanitation in upcoming budget, Mahato added.

Even though, a well is nearby the home, it takes five minutes to pull out a bucket of water from inside the well. Just to fill up 5-6 buckets, we need to spend more than one hour. Well-water is only used for cooking and drinking whereas twice a day we take animals in rivers to break their thirst. From two hours long walk, we  have to go to bring the water If nearby well dried up in summer season, Eklash Devi Yadav, inhabitant of Gurudham VDC, said.

With support from Water Aid Nepal's program, the situation has changed a lot in the region, particularly in the area of sanitation and drinking water.

A report shows, in Gurudham, Lalpur VDC, 853 households exist but only 154 houses have access to toilets and 35% people have the habit of hand washing.

Due to low level of awareness, unsafe drinking water and absence of the habit of cleanliness, every year lots of children as well as youth and adults became the victims of water related diseases.

As summer arrives, a lot of people suffer from water-borne diseases due to the unsafe water and low level wakefulness about sanitation. This causes some premature deaths. According to data, annually about 10,000 children suffer from diarrhea in the region after drinking contaminated water.

But this year, diarrhea has spread since the month of February. In districts like Rukum and Jumla, kids have become victims of diarrhea. Unhealthy foods, contaminated water and lack of hygiene are causing an early diarrhea outbreak, especially among the marginalized communities.

Despite being very rich in water resources, Nepal has not been able to resolve the water problem. Practical actions in favor of people can only prevent people from being deprived of the access to safe drinking water as it is the right of every people.

Not letting the water resources to dry up or reducing the rate of deforestation are only limited to slogans,  and 'water for all' had not saved the life of the infected people.

In the districts of Siraha, Udayapur and Morang, NEWAH has implemented a program through a VDC coverage approach. By working in selective districts, it has been shown to increase the effectiveness of management.

NEWAH’s objective is to saturate the entire VDC with water, hygiene and sanitation services. Through this approach, NEWAH aims to proactively engage with local government bodies and other stakeholders in the VDC to improve coordination and linkages, develop sector capacity for successful service delivery, and increase advocacy and influence better collaboration. Selection criteria for the VDCs include water scarcity, high levels of poverty, remoteness and a high percentage of excluded groups, such as Dalit and disadvantaged Janajatis.

Although it is early to say about the programs, Water Aid and NEWAH's program have showed that supply of pure drinking water can make a difference in the life of the rural population.

EP DELEGATION Visit For Cause By A Correspondent 11 hours, 31 minutes ago