With the breakup of extended families, Nepal's senior citizens are facing loneliness at least and trauma at worst 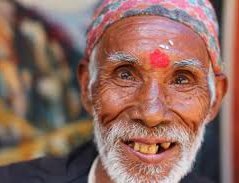 ''I had always remained a loving and caring mother. By my nurturing, I expected, my children would be with me in my old age. But my expectations were ruined the day my daughter sent me to an old age home, calling me 'a relative’ aunt,'' mourned Bhimadevi Basnet, 60, of Ramechhap.

Bhimadevi is not alone to face this trauma in old age homes. Sometimes, old people are dropped at the street by their children. As Nepal's society is gradually turning into nuclear, the aging population faces all the drawbacks. According to Census 2011, over 9 percent of Nepali people are over 60 years old. At a time when the life expectancy is going high, there will be more ageing people in the coming days.

The situation was different in the past when old people used to be highly respected by their younger ones. But due to crumbling joint families and rising sense of individuality, old people have been left to fend for themselves.

The story of Shivaprasad Poudel is more pathetic. He has become unconcerned about his children. To spend an idle life in a lonely home, he feels very desperate. His son and daughter-in-law always remain busy in their own work, said the 71-year man in a low voice.

Not only Basnet and Poudel, thousands of old people have been abandoned by their families and are obliged to live miserable and helpless lives despite having capable children. Although the government provides certain social benefits to the senior citizens as they receive a monthly Rs. 500.00 (US dollar 6) in  allowances, this is not even enough to drink tea for a month.

For the last fourteen months, a group of senior citizen has been chanting the slogan in front of Transport Management Office in Minbhwan with a demand to increase their social benefits and ensure other social security measures. However, the government is yet to fulfill the demands. It is unfortunate that their issue is not even on the agenda of minimum program of the coalition government.

One of their main demands is to increase the current Rs.500 a month in social security for old people to Rs.3, 000. Other demands include preferable discount on health, transport and opening of new old shelter homes in different parts of Nepal.

The manager of Ageing Nepal, Krishna Murari, states 3 reasons why senior citizens suffer: Due to financial crisis, children can't offer good hospitality even if they wish to give good care for them; some parents have enough property but no children to look after them in their older days; and some children don't feel it their responsibility to take care of their parents even with their good income.

National Human Rights Commission and Geriatric Centre Nepal have done two years of survey from (2008-2010) on 117 news published on national dailies related with issues of disrespect to senior citizens. Out of them, 51 incidents are related to physical violence. 45 incidents happen inside the homes.

The report of Global Age Watch 2013 shows, the situation of senior citizens in Nepal is very poor compared with southern Asian countries. Nepal stands at 77th position, out of 91 states. Lack of strict law and regulation for senior citizens is the main cause that they have become neglected by the nation, society and family.

Senior Citizen Act 2063 clearly says that to take care and give good nurture to old people is the responsibility of family and relatives. And, if related members didn’t take the responsibility, old people had the right to file complaints against them in village development committee. But there are little provisions for punishment to those who ignore the old people.

''Nepal's law is emotional rather than one based on sincerity and practicality, because of numbers of senior citizens are living neglected and dominated life. So, it necessary to bring the law of intervention,'' said, Gauri Shankar Laldas, manager of National Senior Citizen Federation. "The rights of children on their parent's property are guaranteed by the constitution of Nepal but to give quality care, strong support and affection for same parents, law has not been made yet in our country," said Das, former member of National Human Rights Commission Nepal.

Even after 14 months of demonstration, the government or the civil society in general are yet to listen to the old voices. This shows the apathy towards the ageing population of Nepal.

EP DELEGATION Visit For Cause By A Correspondent 4 days, 3 hours ago