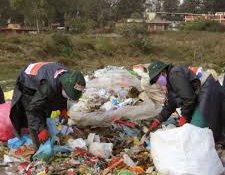 Ram Pukar Das, an informal waste worker (IWW) living in the slums of Bagmati river, had hardly imagined regular health check-up, school for children and cooperative for savings for people like him. Das is happy that other people have also started behaving with him and his friends more positively.

“We never imagined that we could see such good days in our life. Our children go to schools and hospitals and we have certain amounts in saving,” said Das, a waste worker. “One of the most visible change in our life is the recognition of our work in society.”

There is reason for Das and his peers to rejoice. When the PRISM was implemented in 2011, their monthly income was less than Rs. 5000.00 (US dollar 50). That monthly income is now over Rs. 10,000.00 (US$ 100.00) with the proper social respects, savings and credit cooperatives, health care and other trainings for enterprise.

Purna Man Waiba, president of waste worker’s association, also shares similar experiences. “Gone are the days when waste workers were unwanted people. Nobody talked to us and no one listened to us. In the last three years, everything has changed thanks to PRISM,” said Waiba.

Hated by city dwellers and exploited by merchants, the informal waste workers (IWWs), who had been serving by cleaning the city despite their own health risks, never dreamt that they would see positive changes in their life in a short period of time. However, the dream comes true thanks to the programs implemented under PRISM.

For centuries, Nepalese society looked at waste collection and management as the work of untouchables and they were most hated bunch of people with no respect from others. However, certain change in the attitude has already happened.

PRISM had two important components. The first was the social recognition for the waste. Second important component was social protection of the informal waste pickers. The overall aim of the project was poverty reduction by generating income through the solid waste management.

“Although PRISM is a small project, it has contributed a lot in the area of urban solid waste management in the five municipalities of the valley. It also introduced a package to enhance human dignity and brought technology for Compost,” said Dr. Sumitra Amatya, head of Solid Waste Management and Technical Support Center (SWMTSC). “As one of the implementing partners, the center is happy to see the progress in solid waste management by recognizing the role of Informal Waste Workers.”

Despite the important role played by informal waste workers by properly collecting and managing the urban solid waste, city dwellers see these workers some lowly bunch of people. They are even exploited by the kabadi and scrap dealers. Living in the slums of polluted river banks of Kathmandu valley, IWWs are very prone to different kinds of diseases. PRISM model has shown that there are ways in reducing poverty among the waste pickers as well as in maintaining the city clean.

Along the issues of social security of informal workers, there is also the lack of coordination among various stakeholders working in urban solid waste management. In the three years period, PRISM has brought together various stakeholders, including private sector, community, IWWs, municipality and SWMTSC in the areas of solid waste management. As the urban population is growing much higher in the valley, there is the need of most concerted actions to make the city clean.

“After the implementation of the program, PRISM has already reached to 2774 out of 4000 IWWs. Although our target was to form 30 groups, we have formed 59 groups which include 49 female groups and 10 male groups. We have provided safety equipments to 5000 workers including one thousands of municipal workers because these workers also exposed to waste. Direct beneficiary of our program is 2774 non-formal waste pickers,” according to the project sources.

Many projects and programs lose their relevance once they are complete. However, PRISM has chosen a different approach to sustain it for a long period of time even after the completion of project. “As PRISM supported various institutions, the program will continue even after the completion of the project in May. We have trained and equipped them with skills so that IWWs will continue the program,” said Srijana Devkota, program manager of PRISM.

As the Poverty Reduction of Informal Workers in Solid Waste Management Sector (PRISM) is in the last stage, it has already shown that comprehensive and integrated approach is required to improve the livelihood of urban waste pickers to transform lives through a minimum intervention.

EP DELEGATION Visit For Cause By A Correspondent 9 hours, 46 minutes ago