At a time when Nepalese women are demanding equal political rights, participants of a one-day seminar stressed the need for the present electoral laws to pave the way to increase their representation 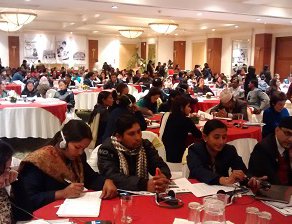 Although several efforts have been made to increase the women's representation in the political arena, civil service and security sector, it remains one of the poorest. The representation of women in political sector is yet to improve.

At a seminar organized by Embassy of Finland, International IDEA, Demo Finland and UN Women, participants of a one day seminar on Electoral System and Women's Representation in Nepal: Need for Reform? expressed dissatisfaction with the present electoral system.

"It is very unfortunate to say that women's representation in the political process is still negligible. Although leaders of political parties expressed their commitment that women will be given 33 percent seats in all sectors, nobody has shown any initiative to implement the commitment," said CPN-UML leader and CA member Asta Laxmi Shakya. "There is less women representation in CA this time than in the past because only a few women won the election from first past the post system."

Thanks to the current act, the representation of women and other marginalized groups increased in PR. However, only 10 women won the elections in the first-past-the-post system.

Finland is using a full list of proportional representation system but without quotas. The system allows the voter to directly vote for a particular candidate from a particular party list," said Heidi Hautala, Finnish politician. "Our system helps improve women's participation."

As Nepal is celebrating the International Women's Day on March 8, the discussion program organized in the capital city will be helpful to understand the system introduced in Finland and make Nepalese political system more inclusive as well.

EP DELEGATION Visit For Cause By A Correspondent 11 hours, 33 minutes ago