Despite efforts by the government and non-government organizations, sanitation and safe drinking water continue to be an unavailable in several places. Even where available, there are people who do not have the habit of using drinking water and sani 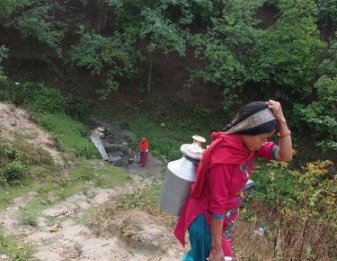 In 1983, Health Nepal built a 23,000L water-tank for VDC-7 of Lele. But the local people have no proper system in place to use it. The lack of resources prevents them from using safe drinking water. After 30 years, Urban Environment Management Society (UEMS) came with 'Basukhi Water Plan', offering sufficient technical support in providing safe and fresh drinking water for the people of Lele.

UEMS has built two water tanks, each containing 20,000L. Currently, one water tank is being used by 224 houses and another one is under construction which as an alternate option for the people, so that in the days ahead, increasing urbanization will not bring the shortage of water as an issue in the village soon. Water has been brought from the water source of Basukhi Mountain, 5km from the Lele village, for storage in the reservoir.

“In the previous days, due to the lack of access to safe water, it was very difficult to make our daily living,” said Suman Nagarkoti, president of the consumers committee. “UEMS has helped us get safe and fresh drinking water, and we are very much grateful and satisfied with UEMS for the effective water plan for our village. We are more conscious about our health, hygiene and sanitation now than before.”

Water, sanitation and hygiene are interlinked. Sanitation is the foundation of the country. If a country is weak from its base, the government along cannot do much in terms of developing strong and healthy manpower for the nation. “If Nepal has to be looked at from the development perspective, initially we should look at the status of sanitation and drinking water of our country,” remarked Ashutosh Tiwari, country representative, Water Aid Nepal. “In comparison with other developing countries, the status of WASH (Water, Sanitation and Hygiene) in Nepal is very poor. Especially, in the rural areas, the people do not have the idea of proper sanitation, neither do they have the habit of hand washing.”

Tiwar informed that, at the moment, in marginalized areas, Community Led Total Sanitation (CLTS) is at work. But the programme districts need effective plans to enlarge the coverage, suggested Tiwari, at an orientation, involving Water Aid Nepal.

The first aim of the plan is to bring about changes in the people’s habits and assist them to adapt to the habits of proper sanitation, hand-washing practices and drinking water from improved sources. Secondly, it is to make sustainable policies for the Post-ODF stage in a sense to take such habits of people in deep level and provide facility of safe and proper access of drinking water and sanitation, he informed.

Toilet is one of the basic necessities of people, needed for anyone, anytime and anywhere. In Nepal, mostly differently able people and menstrual girls are having problems due to their lack of access to toilet in many public places.

A teenage girl at a time of menstrual period remains absent from school for 4-5 days a month. That adds up to 60 days of absence in a year. With such a humiliating situation, women getting involved in the development sector is challenging, even as they form half of the country’s population.

Including menstrual girls, disabled people also face similar sanitary problems. “There are several problems for people like me but toilet is the major one.

“With no easy access to toilet, I finished my graduation through self-study at home,” Amrita Gyawali, consultant in Water-Aid Nepal, said. “If the government helps establish more public toilets somehow, changes in the life-style of differently able people will be possible.”

While designing the toilets, the government should give priority to problems of menstrual girls and differently able people, making separate toilets for girls and boys. In addition, girls need appropriate places to safely throw sanitary napkins.

As per its target to meet the Millennium Development Goals (MDGs) by 2015, Nepal government has improved 73% work in the water sector work and 53% in the sanitation while trying to declare Nepal as Open Defecation Free (ODF) state by 2020. Looking at the 10% WASH status of Bajhang, Bajura, and Khotang, the total progress on water and sanitation sector will be made by 2031.

Inadequate budget and insufficient mechanism are posing a challenge to cleanliness. From 2009, the government has made allocations to sanitation sector. In 2009-2010, the government committed to provide an improved toilet for each house of the country, but the budget of 2010-2011 remained less promising.

According to the GLASS report, Rs. 360 million is the per annum sanitation budget while one billion will be required for proper toilets in Nepal.

“As Nepal is improving its sanitation status while it is facing crunch of resources and insufficient money, the speed of improving this matter is unsatisfactory. The problem of sanitation will not be solved by 2 or 3 years, yet we are trying our best to meet our aims by 2017,” said Ishwori Poudel, Director General, Department of Water Supply and Sewage (DWSS).

From a year ago, Water Aid has been working with various Wash related organizations like, Nepal Water for Health (NEWAH), along with four urban partners. Its constant focus on the marginalized, out of access to water, hygiene and sanitation, promises to change the status for the better.

As every year, programmes related to health and water have been implemented, the condition of poor people and neglected society of the country remains far from satisfactory in terms of their access to these vital aspects. The government, therefore, will need to approach the issue with holistic plans and necessary strategies to meet the total coverage of water for all. Improving hygiene and sanitation needs financial backup and human resources. Hence, sustainable plans to bring positive changes on the livelihood of marginalized and poor people need urgent implementation.

EP DELEGATION Visit For Cause By A Correspondent 10 hours, 35 minutes ago