Whether knowingly or unknowingly, the majority of Koirala’s new cabinet members rebelled against the party at one time or another 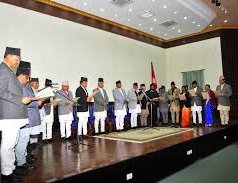 Take the example of the CPN-UML nominee. Deputy Prime Minister Bam Dev Gautam, who rebelled and split the party in 1995 against the decision of the party establishment to support Mahakali's integrated treaty.  Out of ten Ministers, Radha Gyawali, the wife of the late Jeev Raj Ashrit, Purushotam Poudel and Dal Bahadur Rana were with the Bam Dev led splinter group that dissolved the CPN-ML.

The Nepali Congress chose more rebels than CPN-UML members. Seven out of the ten Ministers inducted in the cabinet rebelled against the establishment led by Sushil Koirala at one stage or another. These Ministers were even constitutes of the Nepali Congress (Democratic) as a separate party. Deputy Prime Minister Prakash Man Singh, ministers Bimlendra Nidhi, Dr. Narayan Khadka, Dr.Minendra Rijal, N.P. Saud,Chitra Lekha Yadav and Ram Bahadur Gurung were with the Sher Bahadur Deuba led Nepali Congress Democratic.

Along with Prime Minister Sushil Koirala, Dr.Ram Sharan Mahat, Narahari Acharya and Mahesh Acharya belong to the establishment of the Nepali Congress. This is the reason why a large number of followers of the pro-establishment faction of Nepali Congress and CPN-UML are criticizing the selection criteria of the cabinet.

After almost two weeks of Government formation, Prime Minister Sushil Koirala finally expanded his cabinet. The prime Minister added 8 ministers from his party and 10 from his coalition partner CPN-UML, forming a cabinet of 20 Ministers.

Ethnic groups have already criticized the new government, claiming it is unbalanced and favors the Brahmin and Chettri majority classes. Out of 21 ministers, 15 belong to Brahmin and Chettris, one Newar, two women, three Madhesis, one Magar, one Gurung and one Dalit from Madhesh and two Madheshis. Lal Babu Pandit is the only Dalit member from Madhesh.

Regionally, the majority of ministers are representatives of the Eastern and Central region. Morang district is represented by three ministers, followed by Nuwakot and Kathmandu with 2 each. Mahesh Acharya, Dr.Minendra Rijal and Lal Babu Pandit represent Moran district. Dr. Ram Sharan Mahat and Mahendra Pandey represent Nuwakot and Prakash Man Singh and Narhari Acharya represent Kathmandu. On the perspective of Gender, there are only two women ministers, Radha Gyawali and Chitra Lekha Yadav.

Given the present political squabbling, it is almost likely that there will be more inter-party and intra-party disputes, making the government shaky and unstable as usual.