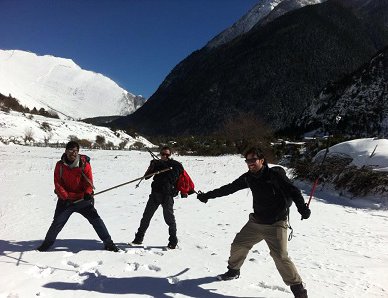 Coming back from Manang has given me new insights into living a life. The daily hard work the people of Manang undertake may demand more rapid pace of development there, but the way visitors experience the place is a splendid brush with the magnificent nature.

There is a dirt road that takes one to the Manang village, but in the absence of two bridges, awaiting construction, the vehicles reach only till Chame, the district headquarters. Locals in particular, the hoteliers, are exploring the possibility of mountain biking as a sport for tourists in that route.

The road is suitable for a four-wheel drive with an experienced driver at the steering. The travel is not without adrenalin rush, though. With the experience we had of driving in those terrains, we could say it was not as risky as I would imagine: we heard about no major accident on the way. A man had fallen from the top of a vehicle and his hand was bleeding. But that was something else that injured person, not the road. No buses but small jeeps ply on the single lane road. The astonishing part of the journey is to see the drivers giving passes to other vehicles rather than meeting head on.

I had travelled from Kathmandu to Dumre and to Beshishahar. This time, I was alone, with acquaintances made right on the road. Every moment of travel was fully mine and worth it. On my way to Beshishar, I had met young police officer Mr. Jagat. We had momos together as both of us were starving when we reached Manang Chautara. He was going to Chame and I was going to Chyamche. Chyamche is two camps below Chame.

While we were waiting for other passengers and the vehicle to start, we met a South Korean. He was travelling alone, too. Later on when we were seated in the vehicle I met Parsuram Pant's team who was also travelling to Chyamche. The team included Hari Lamichhane, Andreas and Marian. Andreas and Marian were from Mexico. Till we reached Manang village we would be together. Parsuram's team was intending to go across the Thorang La Pass to Mustang. Thorang La Pass is at 5,416 meters. On my way to Manang I also had thoughts of going with them across the pass.

We started our trek from Chyamche. The weather wasn't playing any spoil sport as yet. We walked for a day to Bagarchhap. It wasn't an arduous walk. Till Manang the walk isn't difficult one.

We stayed the next day in Chame. On our way to Chame, it snowed the entire day. I wasn't prepared for the snow. I knew it would rain through weather forecasts, but snow was something I had least expected for that day. It was my first experience with snow. I enjoyed the walk, though not without complaining about small things. The new experience always brings some new pleasures and few complaints which we always bring from the past. At Chame we stayed at Potala Hotel. It had been two years the owners of the hotel had returned from South Korea after staying there for 11 years.

We were treated well. The warm fire place after the day's snowfall made me forget how harsh the reality of walking in the snow was.

The next day was expected to snow as well. I had checked it in the internet as Potala Hotel has access to internet. But no one had expected a blizzard.

At Potala Hotel, we met Mr. Bean and Mr. Asher from New Zealand. Both of them were lawyers and they too were intending to cross Thorang la Pass to Mustang. We would meet Bean and Asher on our way frequently because they would start their journey a little earlier in the morning than we did.

The night before our expected departure from Chame, it snowed and a gusty wind blew as if the house would be brought down. In the morning the blizzard scared us all. All of us attempted to walk a little while but had to return to Potala Hotel. Walking in a blizzard was an experience one has to go through oneself to understand the mightiness of nature.

All of us were together that day. The lady of the house prepared food while granny prepared fire place for all of us. The little Youbina threatened all of us with her little toy gun, while Asher, Bean, Parshuram, Andreas and Marian played Monopoly. As the day was long some tried reading books while some went out for a walk towards the evening when the fury of Chame had lessened a bit.

The next day the weather had cleared up and we started our walk. It was a pleasant walk till Upper Pisang. The hotel we stayed was perfectly situated. The room I was allotted was just perfect, too. It was a single bedroom with a view of Annapurna ranges. I got up early at around 3 am and peeped through the window. The moonlit night with snow in the mountains was spectacular. I went out and reclined myself on a table and did not realize how two hours passed by.

In the morning we went out for a walk to a monastery. On my walk, I met some people who reflected how hard the life in Manang is. The monastery was beautifully built inside but needed donation nonetheless.

From Pisang I felt a bit uncomfortable walking in a group which was already crossing Thorang La. I wanted to walk solo for some time. However it was a walk to remember. On the way to Manang village the view was extraordinary. There was a bench appropriately situated and I had to take rest. Lying down on the bench and basking in the sun looking at the mountain peaks were something unparalleled.

But the hunger spares no one. I had momos prepared by a great looking lady whose face I still remember.

At Manang, we had agreed to meet at Hotel Tilichow. The hotel was one of the best in town not without some shortcomings though. They served all varieties of food including Mexican and the local delicacies. That night I had made up my mind not to go across Thorang La Pass. I returned from Manang village to Dhukur Pokhari on the next day and from Dhukur Pokhari to Beshishar the following day. I reached Chame at around 1:30pm and took a vehicle to Beshishar immediately after reaching Chame. A splendid experience was over for that time, but it has remained with me for good.

Tourists Have Not Cancelled Their Hotel Bookings In Nepal: HAN’s Chair Rana By NEW SPOTLIGHT ONLINE 1 week, 6 days ago

Dr. Dhananjaya Regmi, To Head NTB As A CEO By NEW SPOTLIGHT ONLINE 2 weeks, 6 days ago