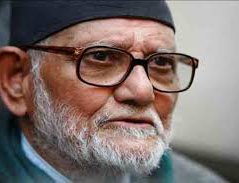 More often than not parallels are drawn between the politics of Nepal and the neighbouring India. Although poles apart in size, population and the economic and military might, the developments in India do influence and inspire the events in Nepal. In recent times, the two countries saw national elections in the span of less than six months. Nepal took the lead -- in November last year. India went to the phase-wise polls last month.

Following the elections, both countries got new governments under new prime ministers. Across the border, the newly elected prime minister Narendra Modi has instructed his ministers to come up with plans and programmes of their respective ministries for the next 100 days. This he did soon after assuming the office. This side of the border, his Nepalese counterpart, Sushil Koirala, struggles to convince his people what he did in the first 100 days in office.

Modi has taken charge of the country on a high note. Besides announcing a cabinet, he has set up a  special investigation team (SIT) on black money, scrapped UPA-era Groups of Ministers, Empowered Groups of Ministers in just over a week of taking the oath of office. The moves have earned him rave comments. His Nepali counterpart, Koirala, is facing just the opposite. He has been slammed for being sluggish, inefficient and unable to make substantial development in the process of constitution making even after hundred days in office.

Koirala’s government has been successful on some fronts such as the promulgation of the law on the Truth and Reconciliation Commission (TRC) and the Commission on Enforced Disappearances. The election of chairpersons of five CA committees and formation of a new National Planning Commission, both of which had been long overdue, have been seen as some other important 'accomplishments' of the government. But much of Koirala's hundred days in office has been marred by extremely slow decision making coupled with a growing mistrust with the  opposition parties. Lately, even the ruling coalition partners have shown signs of friction, as the second largest partner, the UML, threatens to review the coalition with the Nepali Congress.

The  Koirala government has particularly been slammed for its failure to nominate 26 Constituent Assembly (CA) members. As a result the 601-member CA remains incomplete to date.  Despite the Supreme Court’s order last month to nominate the within the fifteen days of the court order, the government has not nominated the members yet. Instead, on the last day of the court's deadline, it appealed to the country's highest judiciary to review the order.  The move is aimed at buying some more time and also at getting the party's leaders nominated to the CA. The court had earlier debarred the party from sending the party leaders who had lost the elections and who failed to make it despite being in the list of proportional candidates.

This sluggishness however does not end just there. It spreads to  many  other areas including the preparations for the summit of the regional grouping, South Asian Association for Regional Cooperation (SAARC), due to be held in November in Nepal. There has been suggestion that the summit of the 8-nation South Asian grouping be held in Pokhara. That is a very good suggestion as it would help promote  the tourist town. But there has been no necessary preparation as yet. The summit will  almost certainly be held in Kathmandu. But the preparations in Kathmandu too have been found wanting, say critics.

One of the major promises made by Koirala before the CA elections was that the elections for the local representative bodies would be held within six months of the formation of a new government. The promises remain just that with the deadline almost approaching.  Rhetoric apart, virtually nothing has been done in preparations for the local polls.  Leave alone the preparations, the government ministers have now even stopped uttering about the local elections.

The government held a press conference last month upon completion of its hundred days in office,  popularly called honeymoon period, to  'highlight' its achievements. The  government spokesperson and the information and communication minister Minendra Rijal said that one of the most important achievements of the present government was that it was able to create a conducive environment for the promulgation of a new constitution.

Notwithstanding the government spokesman's claims and some progress in the constitution making, the atmosphere is far from conducive. Instead, going by the recent mood of the opposition parties the situation appears to be heading towards a confrontation.  The main opposition UCPN (Maoist),  Rastriya Prajatantra Party – Nepal (RPP – Nepal) and the Madhesi People’s Rights Forum – Nepal (MPRF) have been obstructing the House proceedings for about a week now. They are at a loggerheads with the government over the  "misuse" of billions of rupees from the state confers by Nepali Congress ministers. They have accused that the government has transferred budgetary fund to non budgetary programs. The UCPN (Maoist) has also objected to settling the thorny issues in the CA through a vote. The idea came from  Prime Minister Koirala who said that the government is determined to bring out the new constitution by resolving the disputed issues through a vote in the CA if the need arises

Soon after the government's 'honeymoon' at home, prime minister Sushil Koirala happened to land in Delhi to witness his Indian counterpart beginning his 'honeymoon'. As one of the SAARC leaders invited to Narendra Modi's oath-of-office ceremony, Koirala wished the Indian prime minister all the best and received the same in returned.

Even as Koirala exchanged best wishes with Nepal's most important neighbour, back home he is fast losing the trust of those who matter -- the Nepalese people. They are growing impatient with the pace the things have been moving under him. It is high time prime minister Sushil Koirala woke up to this reality. The sooner the better. Otherwise, by the time he reaches his second 100 days in office he will have found the situation too tough to handle. It is said that when the situation gets tough, the tough gets going. If the first 100 days of the government is any indication, the government is anything but tough.