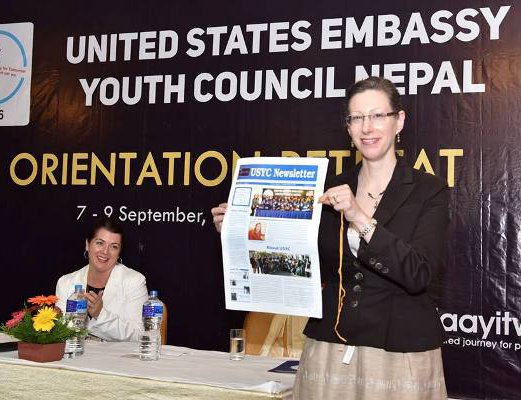 According to a press release issued by the U.S. Embassy, the all-women team climbed Mt. McKinley in Alaska on June 24 and has now reached the top of six of the seven summits of the highest mountains on each of the seven continents.  Only Antarctica’s Mount Vinson remains for them to conquer.  Their goal is to become the first all-female team to climb the highest mountain on each continent.

Secretary Kerry met with the women on their first day in Washington as participants in the U.S. Department of State’s International Visitor Leadership Program (IVLP).  Over the next week, the women will meet with U.S. government officials, non-governmental organizations, and youth to discuss ways to encourage women and girls across the globe to reach new heights in their home communities, as well as ways to build community-based environmental conservation programs.

Through a range of efforts that includes sports diplomacy, the State Department works to advance the rights of women and girls to ensure they have equal opportunities to contribute to their societies, and ultimately to global stability and security.  On March 25, the Seven Summits team spoke at the U.S. Embassy in Kathmandu in honor of Women’s History Month.

Since 2008, the Seven Summits Women have visited more than 200 schools in Nepal, Australia, Russia, Tanzania, Argentina, and the United States, and engaged hundreds of local women in outdoor activities with the goal of inspiring them to participate in activities traditionally considered off-limits to women.  The team also promotes environmental conservation in the local communities they visit.

In 2012, the team members founded their own trekking agency and climbing school.  Once they complete their final summit in Antarctica, they intend to compile their experiences into educational material focused on empowering and educating women and youth and drawing attention to environmental issues.