Political leaders have failed to reach a consensus on constitutional issues, pushing the process of constitution writing into uncertainties 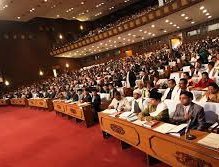 In the recent meeting of the Parliamentary Party, Nepali Congress members severely criticized Prime Minister Sushil Koirala's style of functioning, blaming his inability to address the concerns of the party. Prime minister Sushil Koirala charged his senior colleagues with conspiring against his government.

Koirala's own followers too are unhappy with him. His failed efforts to relinquish three ministers from the cabinet and induct three of his henchmen has widened the gap in his party. Prime minister Koirala is also facing pressure from his coalition partner, CPN-UML,  for non-performance of the government.

Similarly, dissension within CPN-UML continues to intensify. With the appointment of two handpicked ministers by K.P. Sharma Oli and appointment of chief-whip, there is a growing internal dispute in the CPN-UML. Senior leaders like Madhav Kumar Nepal and many other elected CA members are criticizing Oli's highhandedness.

Prachanda and Dr. Bhattarai's internal disputes have come down following the appointment of Bhattarai's loyalist Top Bahadur Rayamajhi as the deputy leader of the Parliamentary Party. However, there is intense internal fighting going on within the UCPN-Maoist rank and file.

All these internal differences are likely to have implications in the constitution writing and making the government work effective.

Along with the internal dissension, the differences among Nepal's three major political parties, Nepali Congress, CPN-UML and UCPN-Maoist, continue to grow over the main issues of new constitution and this is likely to invite intense political instability in the days to come.

After a failure to break the deadlock,  Constitutional Political Dialogue and Consensus Committee (CPDCC) led by UCPN-Maoist leader Dr. Baburam Bhattrai has submitted its report to the Constituent Assembly and  the Assembly again extended its tenure by one week tenure to find some consensus.

At a time when Nepali Congress and CPN-UML are pressing for voting in case of failure to reach consensus on disputed agenda, UCPN-Maoist led 32 parties, in coalition with Madheshi and other parties, have already announced a series of nation-wide protest programs to uncover the conspiracy against the identity based federalism in the name of majority voting.

The tenure of CPDCC has already been extended twice and the recent one week extension will expire on 17 October. Yet the possibility of promulgating the new constitution by January 22 deadline is unlikely. Given the current level of political differences, even promulgation of a simple draft by January 22 is unlikely.

Given the growing cases of distrust and difference among the leaders of major political parties, there is no simple option before them.  According to the Interim Constitution, the new constitution can be promulgated through a two thirds majority voting and Nepali Congress, CPN-UML and other fringe parties together have more than two thirds of strength. By obstructing the session of Legislature Parliament for over a month, UCPN-Maoist led 32 parties alliances have already shown what they can do in case any effort is made to bully them.

Despite several differences on the political agenda, another 34 party alliance led by CPN-Maoist is likely to join with UCPN-Maoist in the streets to obstruct the move. CPN-Maoist leader Mohan Vaidya has already made it clear that they can take any harsh decision to thwart the design to impose a "regressive constitution."

Although chairman of Constituent Assembly Subas Chandra Nembang is sticking to the deadline of January 22, he is averting a political showdown on the issue of promulgation of the new constitution. If the deadlock continues, the parties are likely to amend the current calendar of operation for another six months or the date for the promulgation of new constitution will not be before June 2015.

In case of his failure to promulgate the new constitution, Prime Minister Sushil Koirala, who is facing a stiff opposition within his party for not being able to deliver on the promises to the people, is likely to be the first political victim. The pressure for his resignation will increase in that situation.  Chairman of the Constituent Assembly Subas Chandra Nembang is likely to be another victim in case no any breakthrough happens.

Given the current political scenario, it any consensus on the constitutional agenda to pave the way for writing the new constitution is unlikely. That means political instability will only prolong further.