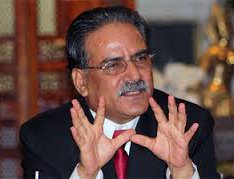 How do you assess the political situation following the CA’s decision?

The January 25th became the black day in the history of Nepal. A question can be raised over CA Chairman Subas Chandra Nembang´s allegiance. Is he a party cadre or CA Chairman? It is very unfortunate that the CA decision polarized the political forces of the country deeply. CA Chairman Nembang should have prevented this polarization by extending the CA meeting for a few more days.

How do you look at the endorsement of names proposed by CA Chair Subhas Chandra Nembang for the Proposal Committee?

CA Chair Nemabang betrayed the wishes of the people. It was a farce. The CA Chair played a role of a party cadre not as an impartial chairman of the Constituent Assembly.  This is not acceptable to us.

Since the CA Chair has already announced the names of members of the Proposal Committee, how will you respond to that?

Nembang is no longer the CA Chair‚ but a cadre of the ruling parties. The proposal is unacceptable to us as it goes against the spirit of constitution and the rule of Constituent Assembly. It is just a joke. No chairman can put the proposal by himself and claim the proposal was accepted by a majority vote. Have you seen these kinds of practices in any part of the world?

CA Chair Nembang said he was compelled to take this step when he saw no possibility to write the constitution because of continual obstruction created by the opposition. What do you say of this statement?

From the very beginning, my party colleagues had been criticizing CA Chairman Nembang for his role. However, I defended him. He attacked all parliamentary norms nakedly on (Sunday, January 25).  It is unbelievable.

How do you describe the event?

It was very unfortunate in the history of the Constituent Assembly in Nepal. Chairman Subhas Chandra Nembang served the interest of those who opposed the revolutionary change brought after 2006 People's Movement and ten years of People’s War.

We always stand for early constitution. However, Nepali Congress and CPN-UML always stand against the CA. They still have the hangover of the constitution of 1990. The Constituent Assembly is our agenda, our baby. Nepali Congress and CPN-UML joined in our agenda. Our alliance has been pursuing the idea of a consensus. If they see the search for consensus as hostage taking, it is their problem.

Since all our previous agreements, back from the 12-point agreement, Comprehensive Peace Pact and Interim Constitution, clearly stress the spirit of consensus to draft the new constitution, we are rejecting Nepali Congress and CPN-UML’s move to follow the majority process. Writing the new constitution on the basis of a majority is unacceptable to us.

However, the CA has already formed the committee?

The formation of the Committee does not have any meaning. We cannot accept it. As I have mentioned, it is against the spirit of peace process.

As the Committee was formed to resolve the contentious issues of the constitution, what is the harm if you are part of it?

We firmly believe that the constitution should be made on the basis of consensus. Hence, we don’t believe in voting.

How do you view the heavy presence of Marshals in the CA?

It is unfortunate to see the deployment of more Marshals than existing CA members. The ruling parties have turned the CA into a 'barrack'. CA chair Nembang is also responsible for this.

What do you say will be the consequences of the move?

The country would invite another conflict if the new constitution was promulgated through the voting process. We have been pushing for consensus among the political parties to promulgate the constitution.

How will you respond to Nembang’s move?

We have decided to launch protests against him from today itself. We will boycott all his public functions till he corrects his move and withdraws the decision.

How do you see the possibility of holding talks with the leaders of ruling parties?

Do you mean your alliance cannot accept the move of the ruling parties?

There is no question to accept this. We will not to endorse the vote-based process to promulgate the constitution and hold any meeting with ruling parties and CA Chair until consensus is forged.