French companies to study feasibility of urban cable car in

French companies to study feasibility of urban cable car in 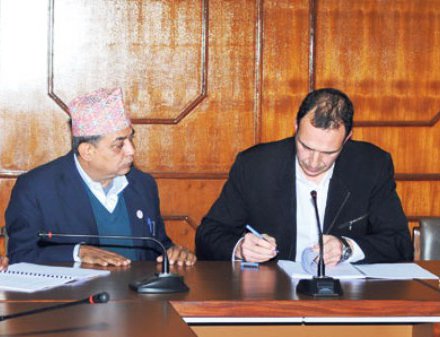 A memorandum of understanding (MoU) has been signed between Ministry of Physical Infrastructure and Transport and a consortium of French companies to study technical and economic feasibility of urban cable car in Kathmandu Valley.

The study would focus on feasibility of cable car from Narayan Gopal Chowk in the north of Kathmandu city to Lagankhel in Lalitpur in the South and from Kalanki in the west to Baudhanath in the east of Kathmandu.

Senior Divisional Engineer of MoPIT Suresh Paudel and group leader of MDP and Systra, a consortium of French engineering companies, Pascal Roux signed the MoU. The consortium will carry out the study. The study would be funded by the French Government.

The agreement was signed in presence of MoPIT secretary Tulasi Prasad Sitaula and French Ambassador to Nepal Martine Bassereau. A joint press statement issued by MoPIT and Embassy of France in Nepal said, “The objective of this agreement is to study technical and economic feasibility of building an urban cable care metro system for Kathmandu city in view of growing air and noise pollution as well as traffic congestion.”

Speaking at the MoU singing program, Sitaula described the project a dream project and said that Kathmandu is in need of alternative mode of transportation to reduce traffic congestion.

“Once the study is completed, MoPIT will look into various modalities of developing and financing the project,” says the press statement.

Ambassador Bassereau expressed happiness, saying this would be an opportunity for French investment in Nepal.

Shyam Mohan Shrestha, president of Nepal-France Chamber of Commerce and Industry, said this will also promote tourism in Kathmandu and in the surrounding areas.