“The Earthquake Is expected To Set Us Back On The Development Front” Dr. Ram Sharan Mahat

Finance Minister Dr. Ram Sharan Mahat , is in Baku, Azerbaijan taking part in Partnership with Nepal Forum. Excerpts of his Statement delivered at the at the program organized by Asian Development Bank. 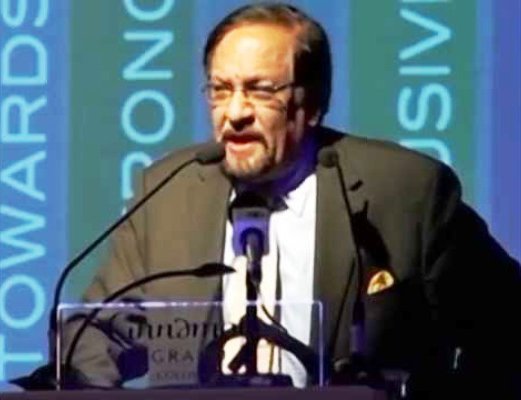 It is with great pain and sadness that I stand before you to present the case of my country Nepal which now remains devastated. The massive earthquake of April 25th measuring 7.8 on the Richter scale has resulted in incalculable human loss and suffering, with millions of people rendered homeless. The scale of destruction of physical and social infrastructure is immense with hardly any school or health post intact in the most affected districts. Access roads and vital public services have been obstructed. Landslides have strained an already fragile mountain ecology. Our and the world’s heritage is wounded with some of the most precious architectural and cultural masterpieces in utter ruin. While entire northern South Asia felt the shocks, the damage has been concentrated in Central Nepal with 90% of the houses destroyed in some districts.

We have not faced a disaster of this magnitude for over 80 years. When the last comparable earthquake occurred in 1934, there were hardly any modern building or road, school or motorized vehicle. The pace of transformation in our country in the years after the 1934 earthquake has been much remarked upon: a country that was never colonized, but shielded from external influence well into the 1950s, jumped from a medieval kingdom into a nation-state of the 21st century in about half a century. Today’s Nepal with the Kathmandu Valley as its political, economic and cultural capital is a modern country of nearly 30 million people who are increasingly educated, politically conscious and globally connected.

On lost and Damage

As of today, the death toll has exceeded 7,000 and more than 15,000 are injured. There are still villages where we know that all houses have been destroyed, but have not yet been able to reach. The aftershocks have not receded and we expect the final casualty numbers to climb much higher, fourteen of the 75 districts of Nepal have been declared crisis-hit, which account for 20% of the country’s population, and have about 1.2 million households. Nearly 300,000 houses have either been completely or partially destroyed. This unprecedented calamity has struck the country just eight after massive floods and landslides swept away dozens of villages in the mid-western Nepal rendering more than 5000 families homeless who are still waiting to be rehabilitated.

On Loss of historical and Cultural Monuments

Importantly, historical and cultural monuments of immense value need to be painstakingly restored and rebuilt. These riches belong not just to Nepal, but to the world as UNESCO world heritage sites. The Changu Narayan temple that is about to collapse is more than 1500 years old whereas temples, palaces and residences in the Bhaktapur, Patan and Kathmandu Durbar Squares easily date back to the pre-industrial era. They mark the glory of Nepali civilization in the central Himalayas.

On the Loss and Damage

The loss, damage and destruction wrought by the earthquake have impacted the government and people of Nepal severely. It has destroyed over 10,000 government buildings and damaged 13,000, straining state capacity to the full. In this era of instant messages and active social media, millions in the Nepali diaspora and our foreign friends whose lives have been touched by their past treks and travels in the country have been drawn to a web of goodwill for the Nepali people.

The government immediately classified the post-earthquake challenge into phases of rescue, relief, rehabilitation, and reconstruction. Rescue was led from the front by the Council of Ministers, aided by Nepal Army, in coordination with other security agencies and foreign friends. Dozens of helicopters have airlifted 2,600 injured people so far from remote villages to city and district hospitals. Thousands of injured people received medical treatment in camps either run or facilitated by the government. Modest amounts of cash relief are also being distributed. Even thousands of livestock have received veterinary care. Initially we lacked heavy equipment to start clearing debris from collapsed structures, but efforts are now picking up with external assistance. Search teams have miraculously saved lives even after 5 days of burial in the rubble.

We are now gradually switching gears to the relief and rehabilitation phase. Tents, medicines, food, and water are being dispatched by the government, NGOs and philanthropic agencies from within the country and abroad. These efforts and means at our disposal are however, still not adequate to the task of meeting the immediate needs of the victims. I take this opportunity to express my admiration and appreciation to the neighboring and friendly countries, international bodies, institutions, and individuals who promptly came forward to extend helping hand in this hour of crisis.

Together with the ongoing relief program, we also have to prepare groundwork for a medium to long-term reconstruction. We have decided to set up the National Reconstruction Fund of US $2 billion initially where the Government is earmarking US$200 million from its own resources for immediate rebuilding of vital lost infrastructures, individual homes and heritage sites. Detailed assessments of loss and damage and financing needs for reconstruction are being done, after which we will make public the true need which could reach into tens of billions of US Dollars. We are counting on the generous support from our development partners to help us in this task. The amounts I just stated are in addition to about US$500 million needed for immediate humanitarian assistance during the rescue and relief phases.

The immediate problem is to providing shelter to about half a million people. The monsoons are coming in less than 2 months, pre-monsoon rains are already here, and it will be another disaster if we cannot provide tents and requisite supplies over the next week or so. Second, we will need to explore options for low-cost housing, rehabilitate bridges and roads, and reinstate schools and health posts. I am happy to note that we have some positive experience in rebuilding and retrofitting schools to make them earthquake resistant. The ADB piloted this in some 200 public schools which have effectively withstood the recent earthquake. We can now replicate and upscale this as we rebuild rural infrastructure like drinking water systems. Finally, we will have to envision new patterns of semi-urban settlement in our mountainous districts, while restoring our historical monuments. This crisis has been a wake-up call for the effectiveness of disaster response, pattern of urban growth and architecture, and the use and availability of public spaces.

The earthquake is expected to set us back on the development front. After a decade long insurgency and political instability, Nepal had just begun gearing up for a higher trajectory of economic growth. Over the past year, we made a transformative leap in the energy sector by signing an historic power trade agreement with India and contracts to develop mammoth hydro-electric plants that would put us on a course to increase our electricity generation by 10 times in 10 years. In tandem with the boost in infrastructure, we have also been working on the next generation of economic reforms, enacting or revising about 40 policies, acts, and regulations. We expected this hard work to pay off with higher growth, but this momentum is now about to be disrupted.

Critically, it is likely that our impressive progress in the social sector such as cuts in infant mortality and access to improved sources of water and sanitation might halt. Tens of thousands of people who had just crossed the poverty line run the risk of falling back into absolute poverty. Our MDG indicators, therefore, could suffer a setback.

The macro-economic consequences are also serious. In services, the housing industry has been hit badly with assets destroyed. It will take years for the sector to regain the confidence of consumers. After the bubble burst in the real estate sector five years ago, it was slowly beginning to revive, but will now stall with some businesses possibly going bankrupt. The fast-maturing banking sector has had an important role in supporting the real estate sector, its profits are likely to decline. Much of Nepal’s tourist attractions are in central Nepal, and tourism could slow down. Communication and electrical industries have also suffered damage. Industrial supply chains have been weakened, and prospects for the revival of manufacturing have dimmed in the immediate run. Up to 10 hydro-electric plants generating about 90 MW of electricity have shut down temporarily.Because of poor agricultural performance this year, we are already projecting a growth rate of under 5 percent. This will be suppressed further as a result of this catastrophe.

I want to convey to you a solemn pledge on behalf of the government and people of Nepal. We will rebuild our country. We will rebuild it better. We will come out of this crisis stronger. But to support our resolve we will need the goodwill of our development partners. Development partnership has been an important feature of our development journey, the current crisis has made it necessary to further strengthen it. We need your technical advice, global knowhow and importantly, substantial financial resources to propel us. Just like you have stood by our side for the past six decades of modern development history, I am confident that you will help us move forward so that the promise of a better life is still within reach for nearly 30 million Nepalis.

Time To Sketch Export Management Approach: Aryal By A Correspondent 1 week, 4 days ago

“We Are Undergoing A Massive Change In Our Governance System” Bishnu Adhikari By NEW SPOTLIGHT ONLINE 2 months, 4 weeks ago