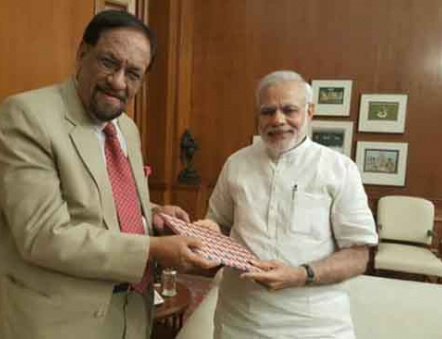 According to a press statement, Dr. Mahat also requested Modi to attend the conference saying that his presence will encourage Nepalis to work for rebuilding.

Saying that huge amount of money is required for reconstruction, Mahat told Modi that Nepal was expecting big support from India. He also expressed gratitude to the Indian government support in relief and rescue efforts after the earthquake.

Preliminary data of finance ministry shows the earthquake caused loss of $10 billion. The government has set up a $2 billion fund to begin reconstruction works. It hopes to raise more funds from donors and development agencies.

According to the statement, Mahat held discussion with Jaitely on allocation of funds to different projects to be financed by soft loan of Rs 100 billion announced by Modi during his Nepal visit in August last year.

Mahat also raised the issue of allowing Nepalis to open bank accounts in India and removing countervailing duty on Nepalis goods, among others, according to the statement.

Mahat also held an interaction with entrepreneurs and industrialists and requested them to invest in Nepal.

PHDCCI Pitches For India To Be A Hub Of Sustainable Mobility By NEW SPOTLIGHT ONLINE 1 day, 8 hours ago