The issue of road traffic has to be considered by local authorities in every large town of the world, to have answers to how to manage it and how to improve it and make it become more fluent. 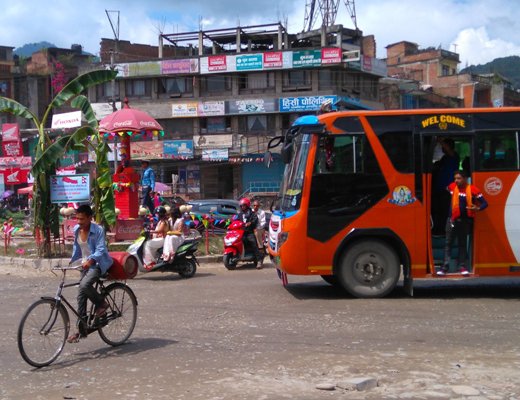 The issue of road traffic has to be considered by local authorities in every large town of the world, to have answers to how to manage it and how to improve it and make it become more fluent.

To say that Katmandu and west-European cities in term of road traffic are very different is trivial, but explanations about the whys have to be done.

First, Katmandu and its valley are overused: 5 million people currently live in, while only a tiny 1.5 million are supposed to. Infrastructures are not made to welcome this amount of human activity, and the situation doesn’t seem to get better.

In 10 years the number of vehicles has tripled and there are now nearly 700,000 cars, buses, motorbikes and rickshaws on Kathmandu’s roads. New car registrations are rising by 12% a year, but the striking fact for the newly-arrived in Nepal is that the total number of cars looks ancient, but they just keep rolling. Colored trucks from another time and tiny motley cabs abound all around the capital city, local buses in a cloud of black fumes can ever welcome one often more travelers, even if they look ready to explode. .

The surprise also comes from the absence of circulation rules, or more precisely the appearance of a collective forgetting of them. The priority is given to the one who will honk and impose himself, and each tiniest space between vehicles is a place your car or your bus can and will go. Quickly, the impression of a total, anarchic mess comes in mind: traffic jams are daily, even only between scooters, in a symphony of multi-tonal horns. Accidents are frequent, and the numbers are worrying, as the city itself evolves. From 2010 to 2015, Nepal experienced one of the highest rates of urbanization in the world, with the result of a 130 percent increase in accidents at the same time, according to figures from Kathmandu’s Traffic Police. Migrations from rural to urban zones are intense, even more in the valley - the valley’s towns alone received 40.9 percent out of the total rural-urban migrants in 2001. After the earthquake, the movement intensified :  Flow minder, a Swedish NGO, using mobile phone data to document internal movement immediately after the April earthquake, reported a 5 percent drop in the population of Katmandu, and a 5 to 11 percent increase in the population of some of the worst-affected districts in the area.

Pollution becomes the severe repercussion of these massive flows. The country has been ran the second most polluted country in the world by the Yale Environmental Performance Index in 2014, while the valley with his position surrounded by mountains stops air circulating and makes its position worse. Above every road and verge used as a road floats a sky of dust, blackened by a look-like cloud of coal directly derived from the middle-aged motor engines.

The fact is that traffic lights here are replaced by traffic agents at crucial crossroads, and these junctions are the only places where a road code seems to be respected. Otherwise, the national habits have created a kind of parallel book of driving rules, admitted by all here, but looking alien for anyone arriving from an other country. However, the main difference with our country is that near this huge amount of traffic jams, the drivers won’t ever remain perfectly calm. In France for example, even if the ride is more efficient, any unexpected event (car stopped on the road, people going out of the vehicle, every decrease in speed) make road users some times angry, often impatient. The notion of time is on every point different, because the priority here is to arrive, without any consideration of the delay it will take. In Nepal to see people keep smiling in the middle of a hornet’s nest of metal and plastic is astonishing.

But actually, Nepalese people will have to wait for the traffic to become a political priority, to begin to see real improvements in safety and efficiency. And with everything else that the country has to deal with, roads may not be the main consideration in a short term.