When VIN builds, it also wants to let to the communities through some different programs, an experience, a heritage, and knowledge for their development, their access into society, but also for their survival and health. 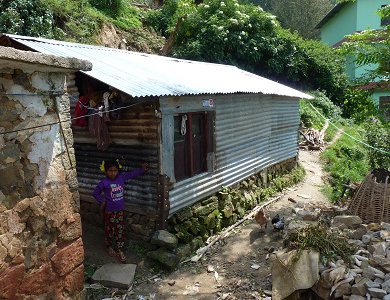 One of the main concerns of a post-disaster is always the housing. The 25-april-catastrophe destroyed about 600 000 houses, and so many more where dwellers have their house upright, but cannot just anymore live in, which implicates more fees to destroy and rebuild.

Quickly, the government gave two different building plans of make-yourself shelters, one precarious for a short term and another for a mid-term period. After this release of the authorities, private initiatives came into play to propose different types of shelters, fitting with local and available materials, to get round transportations difficulties in mountains or in areas with cut roads or land sidings issues.

Since 2005,Volunteer Initiative Nepal (VIN) is one of these organizations who get involved for communities in need : lots of are in Nepal, but VIN wanted to find an accessibility but also safety in communities it wanted to help, and the opportunity to involve local people as far as international volunteers.

VIN commits notably in Okhaldhunga, Nuwakot, and in Kathmandu. In Jitpurphedi community, 10 miles away from Kathmandu but originally with bad sanitation and weak infrastructures for children education, 80% of the 1100 families didn't have toilets, now 90% have access to proper sanitation.

With the earthquake destroyed around 900 houses, the reaction was instantaneous, three phases of action in the post disaster relief emerged: the rescue in the providing of transitional shelters (1200tentswere sent), the attention of VIN put on the health of the rescued in priority. In the second phase, the rescue becomes rehabilitation: currently VIN and its volunteers are still helping to erect transitional buildings, based on cooperation between the community and the organization. Shelters come up on the hills and toilets go with.

For the shelters, VIN provides fourteen metal sheets for the roof; the family has to bring what is missing, i. e. wood for the structure and often metal sheets as well for the walls. Electricity is running in the shelters, water is taken from common fountains, but sometimes the family cannot even bring the necessary to have a completed.

The occupants of these shelters, generally seven under the same roof, live from farming activities, in majority have a good opinion and feel thankful and proud about VIN, which they knew before even if they didn't have to deal with. This earthquake was not their first, but the others were surely less frightening, and no longer than a few seconds. Very simply, they explain they can’t at the moment buy or build themselves a house, and that this situation will probably stay the same for six or seven years.

For a few shelters, the insects begin to eat the wood; in others during the monsoon, some water has trickled down the roof, the climatic conditions have forced the occupants to be inventive, or to adapt with what they find. Since the earthquake, VIN mobilized volunteers and skilled-men power to build more than 550 shelters and 50 temporary classrooms, at the rate of three days of work for one shelter.

The organization plans to build 500 more toilets in four months, but also permanent classrooms. VIN buys the materials in town by its resources, from the volunteers or the sponsors. But in fact, the issue of construction isn't just a matter of having a roof to sleep under. One of the main concerns of VIN is also to find a real sustainability in its work with communities, and that is the third part of the post disaster relief.

When VIN builds, it also wants to let to the communities through some different programs, an experience, a heritage, and knowledge for their development, their access into society, but also for their survival and health. With WASH (Water Sanitation and Hygiene), the health program, the priority is given to sanitation, by the ways of toilets buildings, but also the teaching of safety or health measures.

At the same time, the organization looks for development by community centers too, where members can meet and share, to have a beginning of social integration. Bhupendra Ghimire, director and founder of the organization, wants the centers to be earthquake-resilient and then work as examples, prototypes.

"If we can’t always help them with money, let’s help them with ideas," he says, hoping that community people will take inspiration from these constructions, to protect residences from natural disasters.

In Jitpur, VIN chooses the families who need the more : if a member is disabled, old, pregnant, with an infant, then the construction will here become the priority. And from times to times, VIN staff go from families to families to have a follow-up on the current situation, and then make a review to the organization : this is this sort of involvement which shows that the situation can be improved by shelters, but the reconstruction and the new development of Nepal will have to be made by more than a couple of metal sheets.