The earthquake finds its most massive repercussion in buildings destroying or collapsing. 600.000 houses destroyed, hundreds of thousands of people left homeless, the seismic major not only by it, but by the wrecked infrastructures 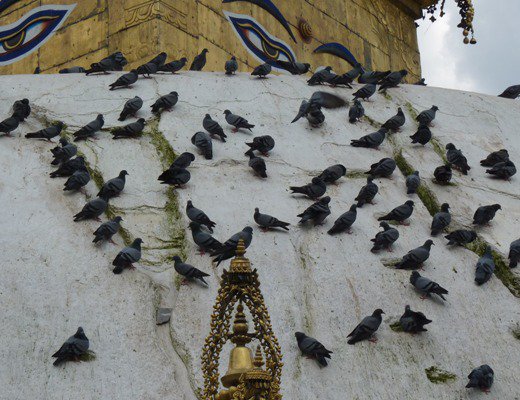 The earthquake finds its most massive repercussion in buildings destroying or collapsing. 600.000 houses destroyed, hundreds of thousands of people left homeless, the seismic major not only by it, but by the wrecked infrastructures. A common phrase says that the waving ground doesn’t kill, but buildings do. After counting the injuries, the shock has to be replaced by reconstruction, and the act of re building is also a crucial issue in historic sites.

The Department of Archeology is in charge of these heritage sites, and since the earthquake draws up and classify the list of the damages to monuments, before preparing the planning for restoration and/or reconstruction. In the 24 districts of heritage sites, 720 historic buildings are damaged, 140 have collapsed: some will just be preserved, waiting for maintenance. In Kathmandu, around 150 are partly damaged, 50 partially collapsed and another 50 have collapsed. UNESCO, long-time partner of the DOA, works together; it brings help, support, an international opening of the local issues too. At the beginning of May, in an interview to Deutsche Welle, Christian Manhart, head of Nepalese department of UNESCO in Kathmandu, announced that 60% of the seven World Heritage sites in the Kathmandu valley had been destroyed. The cost of the damage was and still is undetermined, and the estimations were cautious:  it is quite likely that it will cost hundreds of millions, but it might as well be just 50 million, it is relatively hard to tell.

Beyond the figures, this specific type of reconstruction is an absolutely crucial feature, with diverse but convergent priorities. The valley, and more largely the country, lives from a significant amount of income derived from tourism: 8% of GDP, 7% of employment comes from there, government data shows that 800 000 foreign tourists visit Nepal every year with the heritage sites, monuments and temples as a popular attraction. Thus, these locations become the showcase of the country for the visitor, so it is important to fix up the breakages. But instead of being only outstanding visit locations for tourists before two weeks of trek, these heritage sites are also integral part of the daily life of each inhabitant of this country.

These sites have coherence between each other, as much as a really ancient and glorious story: this is why links cannot be broken by fallen-down buildings. In fact, Nepal rises by the fact it finds again its heritage. According to Megharaj Adhikari, faculty member of the Central Department of Management in the Tribhuvan University, in a tribune in the Kathmandu Post, if the presence of these temples contributes to the well-being of the tourist, the loss of these sites, relegated as things of the past would result in the indeterminacy of our country and identity.

As we speak, the priority of the DOA lies in the sites of the Kathmandu valley, but especially in the living monuments. This designation refers to the sites where local people actually live and can meet and worship, because the daily life of Nepalese is not only about the house, but also for a large part about temples and religious sites, and from this perspective the temple is the extension of the house.

The DOA currently estimates the physical damages with the help of architects and engineers, and considers this review will be completed in three or four months. They are also supposed to give a figure on the cost of the reconstruction. Because it is obvious that the future months won’t be given over to renovation, but reconstruction from the ground. Some will want the making of the exact same buildings with local and traditional materials, to promote the Nepalese pride and history. However, the earthquake is unfortunately not the first and it won’t be the last, and this event reminds every one that Nepal is a seismically-active country, and that it must then be adapted to the natural disasters. Moreover, to build in the same scheme would be to condemn local people to suffer perpetually from these catastrophes.

At this time, the DOA (in partnership with the Ministry of Civilization) is considering the building with new materials, and plans this reconstruction in a period of 5 to 8 years; according to the spokesperson of the Department, no number cannot be given about the cost of the reconstruction, but we can suppose it will come close to billions of rupees. The government will manage the financial aspect, with the help of internal agencies and NGOs the DAO will just supervise the rebuilding work, in partnerships with municipalities, and will provide technical support. The wide ranging remaining work will need lot of manpower, but there are no doubt the Nepali people if asked to, would be present to reconstruct the sites, because of their attachment to them.

Eighty one years ago, one of the most terrible earthquakes Nepal can remember destroyed the country; this has totally changed the face of Kathmandu. Previously with streets lined with temples, the reconstruction shaped a new city, replacing the cultural with the practical. But today, if the changes won’t be as big as these of 1934 were, it is established that the habits have to adapt to the situation: the reconstruction will be long and necessary even if expensive, but the future has to now to be faced, and the imperative of long term durability despite the natural unforeseen turn of events has to cross every mind not only concerning temples but also civil habitation, because if nothing changes, next time the human loss could be much worse.

EU And UNICEF Join To Prevent Malnutrition in Children During COVID-19 Crisis By NEW SPOTLIGHT ONLINE 16 hours, 11 minutes ago