At a time when the Nepal is seeking more foreign direct investment in power and other sectors, founder of Gandhi Law Associates and advocate GANDHI PANDIT, who completed his law degree from Colombia University, spoke to New Spotlight on challenges an 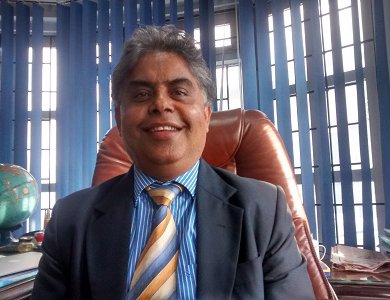 As Nepal has already promulgated the new constitution, how friendly is it for foreign investment?

How friendly is Nepal for foreign investors?

What I can say is that our law is unfriendly towards them.  As investors are coming with a big investment, it is natural for them to bring some people to handle the business. Unfortunately, until now our immigration laws and regulations restrict the foreign workers in Nepal.  Only investors can come to Nepal with millions of dollars. However, they cannot bring their employees. This is damaging the country’s image. Even in the United States or Europe, an investor is allowed to hire the workforce as per his or her wish from any country. Our policy is: bring money and we will give the workers. If a foreign investor is not allowed to bring a couple of people, no sane investor will come to invest in Nepal.

What do you suggest then?

There is the need to amend our immigration laws and regulations. They should be made at par with the international standards. If a Nepali can go and work in a foreign country, we also need to welcome foreign experts. There is the need to improve the laws. Frankly speaking, the present immigration laws and regulations are much strict in provisions to issue visa than Australia, Europe or America. Recently, a world renowned Mobile Company cancelled its proposal to invest in Nepal over a billion dollar because of the immigration law. If you invest a million dollar in US or Canada, they will give you a green card.

Why is Nepal’s Immigration Law is so restrictive?

There are no reasons. If you want foreign investment, your law must have simpler procedures for immigration. Forget about others, even a manager of Standard Chartered Bank has a problem related with visa as the government cannot issue visa for more than five years. As we know Standard Chartered Bank is a well renowned bank with highly skillful and qualified managers who can go to any parts of the world but Nepal’s law does not recognize them.

How do you look at the issue of repatriation of foreign currency?

The repatriation is another stumbling block for foreign investors in Nepal. World’s renowned company attached with Ncell is facing the problem of repatriation. More than 10 billion rupees is stocked in the central bank.  Because of this, they have already announced that they will withdraw their investment from Nepal. As Nepalese laws and regulations are not friendly towards the foreign investors, many renowned companies are not coming to Nepal.

What are other issues?

If the current blockade in the border continues for a few more weeks, almost all industries will be shut down in Nepal. There is no relief for industrialists and economic protection in such conditions. One can shut down the industry if that is not in operation for more than 3 months. There is a retreatment provision. Labor Act of Nepal allows industrialists to shut down the industries in case the industries close down for more than three months because of act of god or unavailability of raw materials. Again, we don’t know how labor court will take the issue.

Many Nepalese expats living abroad are suggesting filing petition in international court against India for its blockade in the border. How do you look at this? How does the international law interpret the economic blockade?

I want to separate two issues in regard to international trade embargo or so-called undisclosed embargo. Undisclosed embargo is one issue and sovereignty is another. Nepal is a sovereign and independent country and no other country, whatever the consequences, can undermine our sovereignty. As a citizen of sovereign country, it is unacceptable for us to see any kind of foreign intervention. Insofar as the issue between India and Nepal on undisclosed embargo is concerned, it will be impossible for Nepal to prove that India is posing embargo given the present scenario. People are speaking on the basis of sentiments. When it comes to the international law, it is very difficult to prove this.

Then why are they making such a hue and cry?

This is for their personal and petty gains. As India has been releasing the goods at different borders, one cannot say that it is an international blockade against Nepal. Nepal cannot establish this. Those who have been talking about this issue are doing so for media hype. By saying so they are not protecting Nepal’s national interest. It is their wish to show themselves not the country.

What does the international law say?

If you read the international sea laws and agreements, they have provisions that say about blockades. Nepal –India Transit Treaty governed Nepal’s transit rights. Nepal India Transit Treaty was signed in 1999 and renewed last year. Nepal and India are the signatory of the Law of the Sea Convention 1984. Article 42 of the convention says that a landlocked country should get access to the sea without any hindrance.

What is the right of a land-locked country?

Then, how are the government and media terming the present state as am unofficial embargo?

So far as the unofficial embargo is concerned, I do see a little chance to prove it. Newspapers are carrying the news that goods are coming to Nepal including the petroleum products from different transit points. Nepal imports over 70 percent of imported from Raxual Transit point. Our government has been saying that the Raxaul point is closed due to the agitation of Madheshi Morcha. Government is also saying that they are receiving the goods from other border points. Have 30 percent goods come or not? If Nepal does not receive 30 percent goods, then it is a trade embargo. India is very smart dealing with Nepal and they have been sending 30 percent goods coming from other points. India has a strong point to quash Nepal’s point at any international forum.

What does Nepal need to do then?

Nepal needs to deal with India very tactfully as India is a big country in economic and geographical size. It does not mean that a small country should surrender with a big country -- what I want to say is that we need to be very vigilant in terms of talking our rights. India has also lawyers.  Even recently Indian prime minister manipulate the United Kingdom. Bringing the law suit at the court is not in the interest of Nepal. Of course, it gives some leverage to some individual.

Who is responsible for FDI?

In order to invest in Nepal, a foreign investor needs approval. Department of Industry is responsible to issue the approval. It is the authorized agency to decide on all kinds of FDI related issues. After the Department permits investment, the investor has to go to NRB.

What is the role of the central bank?

How do you view labor issue?

As far as labor is concerned, labor has two aspects. One is those workers who work in enterprises and industries and the other are those who make investment or industrialists who put money. The industrialization process cannot move successfully without the good relations between labor and industrialists or entrepreneurs.

How do you balance relations between entrepreneurs and labors?

Labors always want to get more benefits than they do have at the moment. Labors want all benefits even if the industries suffer badly. The labors in Nepal do believe that industrialists have to pay them money in whatever the condition they might be facing. This is the psychology in Nepal. Similarly, the entrepreneurs also want more benefits without giving proper facilities to the labors. Actually, labor law can a play catalytic role in balancing between entrepreneurs and labor. Now the question arises what organs are there to settle the issues when disputes arise between the two. One is political parties and the other is judiciary. However, the psychology in Nepal is that labor means labor and they are supreme.

How do you look at the role of political parties?

Political parties always support labor and stand before them whatever their demands. Political parties see the labor as a big vote bank. Thus, political parties never speak against the labor even if the country’s economy suffers from their actions.  When it comes to judiciary, it also favors masses. Judiciary sees labors as poor and oppressed people and judiciary also always sees entrepreneurs as rich people with capacity to spend the money as much as they can. When entrepreneurs and industrialists file petition, the psychology is always against them. The third important reason behind the foreign investors turning back is heavy corruption in bureaucracy.  In each and every step, an investor has to pay money. An investor has to face many hurdles in each step of investment, including at the central bank. Constitution cannot do anything for this.  What is required is a change in our mindset.