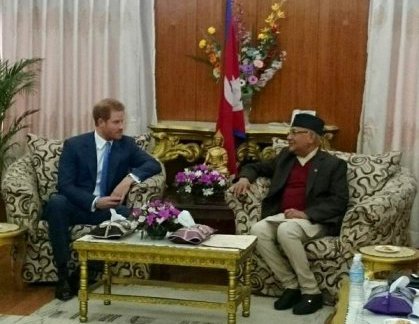 He landed at the Tribhuvan International Airport (TIA) on a Qatar Airways flight at around 2:40 pm. Prince Harry will be staying at the Soaltee Crowne Plaza in the Capital.

Prince Harry will attend a reception hosted by Deputy Prime Minister and Minister for Foreign Affairs Kamal Thapa this evening.

On his visit he will see earthquake recovery projects, Nepal's stunning landscape and pay a personal tribute to the Gurkhas.

He will also meet those affected by two devastating earthquakes which struck Nepal in April and May 2015 to learn about efforts being made to restore buildings of historic significance and to assist disaster preparedness.

He will experience rafting on the Khauraha River and view tiger camera traps in the jungle, the same day. He will also visit Dalla, a local community which is benefitting from the economic potential of tourism by offering homestays to visitors, the statement further read.

Later that day Prince Harry will travel north to the Pokhara area, where he will take part in a trek in the foothills of the Himalayas, read the statement.

The British Royal who had worked with Gurkha soldiers in Afghanistan will also visit the British Gurkha Camp in Pokhara, where he will commend the bravery and service to the Crown of an exceptional group of soldiers.

The trek will end in a remote hamlet in the hills where Prince Harry will enjoy a cultural show organised by local people before, watching the sun set over the Himalayas. He will spend the rest of the evening at a Gurkha homestay, where he will stay overnight, the statement read.

On March 22, Prince Harry will watch the sunrise over the Himalayas before departing the hamlet and trekking to a local secondary school.

The visit will conclude in Kathmandu on March 23.