Violin: From A Passion To Profession

Bikash Nath Yogi started learning the violin at the age of four under the guidance of his father Gopal Nath Yogi, a renowned musician, who was trained as a musician in the land of Gwalior, Madhya Pradesh, India 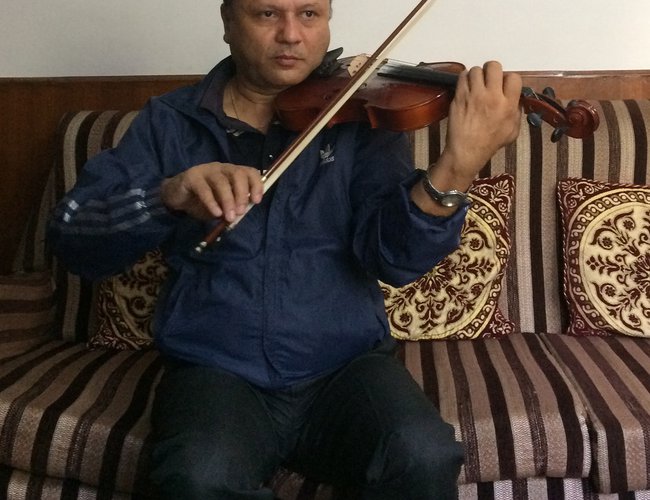 Performing arts came to allow people to explore arenas outside the stringent realm of traditional subjects. Dance, music and theatre have moved beyond the idea of just being a means of entertainment. The journey of performing arts began in order to express ideas that could cater to a larger audience. It transcended the boundaries of a structured discipline and opened up at a public forum, enabling communities to come together. Every form of performing arts has prospered and come a long way. Hence, today, we have the option of taking it up as more than just a hobby.

Bikash Nath Yogi started learning the violin at the age of four under the guidance of his father Gopal Nath Yogi, a renowned musician, who was trained as a musician in the land of Gwalior, Madhya Pradesh, India. Unable to escape the musical atmosphere of the house, he had been in a regular practice and quickly picked up the skills of a violinist.

“It was a game for me as a child, like cricket and football was for others,” says Yogi, recalling how involved he was with his musical instrument as he would practice for an hour in the morning and two in the evening on a daily basis. Despite his father's equal provisions of practice sessions to all the four children, he has been the only one amongst his siblings to take it further. Like every other child in school, he also aspired to reach the pinnacles of success in one of the celebrated fields, which was medicine or engineering. But at the age of 16, he secured first position at an event in Radio Nepal, after which he decided to professionally enter the arena of music. His choices and aspirations in terms of a career changed with age but his determination towards standing out in his occupation proved consistent. Since a very young age, he has had opportunities to showcase his talents at a public forum. His regular practice with violin not only sharpened his skills but also molded him into a young and confident individual. Unsurprisingly, at the age of 21, he had the potential to lure the audience to the melody of his violin at a concert in Europe. His international representation of the country at such a young age in the field of music teaches us the value of committing to our goals.  Along with mastering the art of beautifully playing the violin, he also academically indulged in the field of music. He earned a Master’s degree in Indian Raga System from Kolkata in 1987 and has also taken various western music courses. He mostly enjoys playing the Nepali Folk songs in his instrument but he also loves the elaborate Indian ragas.

Yahudi Menuhin and Ravi Shankar have been his role models and he very much admires both their very distinct contributions to the field of music. After his several performances at an international level, Yogi came to realize the essence of the Nepali Culture and our rich heritage. With this realization, he took up Sarangi as his main instrument too. Sarangi is a Nepali string instrument that is mostly popular in the western regions of the country. It was relatively easy for him to take up this instrument as it is also played with a bow and is very similar to the violin. He plays the Sarangi equally well and has been performing with the instrument for some time now.

Yogi is currently the deputy director at the Nepal Academy (Nepal Pragya Pratisthan). He also offers his services as a violin teacher to students who wish to learn on a weekly basis at home. He believes in training his students in a manner that they take up music as seriously as any other discipline. His students also have the opportunity of learning the Sarangi once they complete a certain level with the violin.

Carrying on the legacy of his father, Bikash Nath Yogi has successfully transformed his passion into a profession. Despite his tied up schedule, he never misses his regular practice, which is an hour per day and he is also working on accomplishing his dream of composing a ballet. For him music is a way of life and imparting his knowledge to the younger generation is what keeps him happy. He believes in the power of any kind of music to bring some sort of discipline in life. Thus he urges each and every one, especially children to take up any one instrument and practice on a regular basis. He very passionately opted for this profession rather than just stumbling into it due to lack of any other option and he has earned immense recognition for his contributions as a musician. The shadow of his father’s name still encourages him and reminds him that there always is a scope of improvement.  He is an inspiration for all the budding artists to keep their spirits high as the scope of profession in the field of performing arts is as high as it is in any other field.