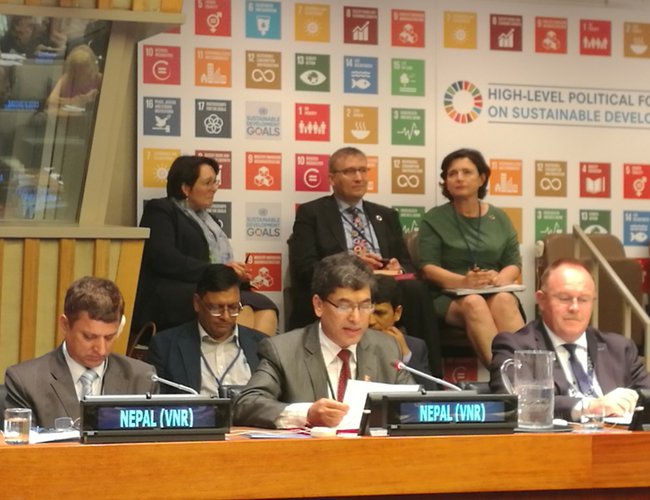 Nepal presented its Voluntary National Review (VNR) regarding the implementation of the 2030 Agenda for Sustainable Development at the High-Level Political Forum (HLPF) on Sustainable Development, currently in session under the auspices of the United National Economic and Social Council (ECOSOC) in New York. Dr. Min Bahadur Shrestha, Vice-Chairman of the National Planning Commission, presented the VNR as leader of the Nepali delegation at the HLPF's ministerial segment, which opened earlier today.

Vice-Chairman Shrestha stated that the country's expected high economic growth of 7 percent in Fiscal Year 2016-17 may be the beginning of a key turnaround for Nepal's development. He highlighted Nepal’s ambitious and rights-based Constitution as the overarching guide to the sustainable development and underlined the importance of forging strong partnerships at the national, regional and international levels and among multiple stakeholders for its implementation. In this regard, SDGs are being integrated into national plans and programs, he added.

According to a press release issued by Ministry of Foreign Affaris, despite gaps and challenges, Nepal wishes to swiftly complete the unfinished agenda of MDGs, and step up its efforts to achieve the SDGs, building on the encouraging gains made so far, the Vice-Chairman highlighted. He also updated the forum about Nepal’s plans across different goals and targets and informed that SDG codes are assigned to all programs under the national budget, together with the tracking of expenditures, among other things. He also fielded the questions from the discussants, Member States and representatives of the civil society.(Full text of the statement is attached herewith.)

The HLPF is the central platform of the United Nations for providing political leadership, guidance, and recommendations for the implementation and follow-up and review of the 2030 Agenda.VNR is a mechanism through which the Member States showcase their progress in achieving SDGs, as well as the gaps and challenges facing them. This is the second HLPF after the adoption of the 2030 Agenda in 2015.This year's HLPF is being held from 10 to 19 July with 44 Member States including Nepal presenting their VNRs.

The Embassy Of Germany Organized Two Charter Flights For Repatriation of Tourists By NEW SPOTLIGHT ONLINE 12 hours, 53 minutes ago