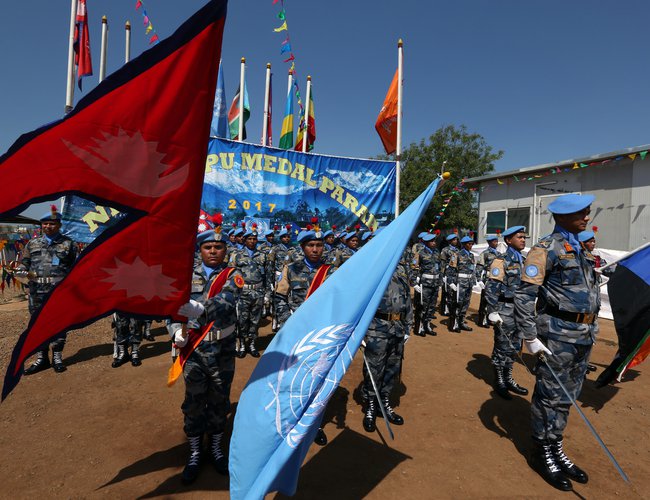 United Nations Medal parade ceremonies for UN Peacekeepers ending their tour of service are a common occasion in missions around the world.

The Mission in South Sudan is no exception. 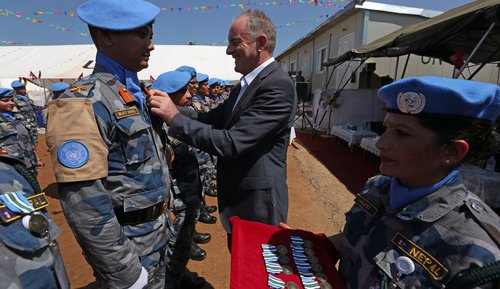 But for every individual peacekeeper that stands in front of an audience waiting to be pinned with the iconic UN insignia medal, it is a unique and special moment.

It was no different for the Fourth Nepalese Police Unit during a medal award ceremony at the UN base in Juba. The pride and joy on the faces of the peacekeepers receiving medals was clear for all to see.

“I feel very proud and happy because I have helped and supported many internally displaced people here. I feel I have successfully concluded my mission,” said Mala Awa, a female Police Inspector.

In awarding the medals, the Head of the United Nations Mission in South Sudan, David Shearer, praised the contingent of 320 police officers – 180 based in the capital Juba and 140 based in Bor, in the Jonglei region, for “their commendable contribution to the Mission’s core mandate which is to protect civilians and to build durable peace in South Sudan.”

As they prepare to return home in February 2018, after a year-long deployment working in difficult and stressful conditions away from family and friends, the UNMISS chief urged the peacekeepers to “wear the medals as proud and worthy ambassadors of Nepal and the United Nations.”

Of the 320-strong Nepalese police force, 27 are women.

“The more women we have, particularly in these roles, the better we are able to communicate and work with the people of South Sudan,” said David Shearer. “Many of the people who are most affected are women and children and they respond very well, particularly to women police.”

Having travelled far from their small landlocked country, home to the famous Mount Everest, the Nepalese Formed Police Unit has served and protected the people of South Sudan including the internally displaced who have sought refuge at the Protection of Civilians (PoC) sites next to UN bases in Juba and Bor.

David Shearer recognized the wide range of activities the unit has been involved in, which include public order management, supporting humanitarian efforts, and engagement in patrols in and around Juba city to ensure the safety and security of civilians. They have also provided security to VIP visitors, with the most recent and notable visit from the United States Ambassador to the UN, Nikki Haley.

Speaking at the ceremony, UNMISS Police Commissioner, Bruce Munyambo, applauded the “dedicated, disciplined and loyal” FPU members who risked their lives to protect civilians, paying special tribute to those who sustained physical injury during the crisis in July 2016.

“Even in lesser numbers, you stood firm to protect others,” he said.

The first group of Nepalese peacekeepers arrived in the conflict-affected country in January 2014 shortly after the outbreak of civil war in December 2013.

Since becoming a member of the United Nations in 1955, more than 100,000 Nepalese have served in peacekeeping missions around the world.