Organizing people’s caravans, taking part in human rights magna, constantly monitoring the state of earthquake victims and reconstruction, interacting with various stakeholders and publishing reports, Humanitarian Accountability and Monitoring Initiative (HAMI) has been raising the voices of the earthquake victims, a large number of whom are living in temporary shelters almost three years after the devastating earthquakes. 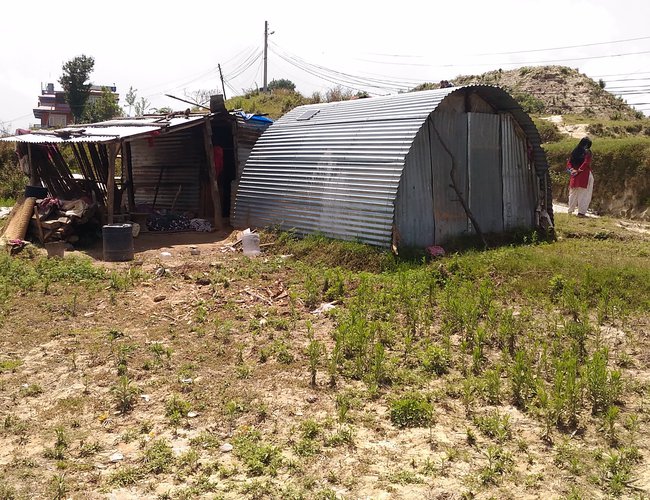 Like many other houses in her village, the house of Maita Gurung, 70, who is a divorcee, was also destroyed by the earthquake of April 25, 2015.  Living for more than two and half years in a temporary shelter, she has just moved to her new house, which was built with the support of various organizations. Had she waited for the government grant, she would have to live in the temporary shelter for an uncertain period.

Living with her 35 year-old son, who has frequent health problems, she needs to spend most of her family’s earning from agriculture for his treatment. A very minimal amount is left for fulfilling the basic needs of the family. Given such circumstances, she feels grateful to those who supported to build her house.

Sixty five years old Krishna Awale of Sundhara of Lalitpur Metropolitan City has a similar story to tell. The government is yet to provide the next grant to reconstruct his house. “I don’t understand how we can reconstruct the house in urban areas like Lalitpur with Rs.50,000.00 in the first installment,” asked Awale.

Murari Nepali, a resident of Dhaibung Village committee, is landless. The earthquake destroyed his home and the National Reconstruction Authority declined to provide the reconstruction grant as he did not have the land ownership certificate either.

These are not unique cases. According to a study conducted by HAMI, tens of thousands of victims have been living in temporary shelters for almost three years with no hope to receive the housing grant for permanent shelter.

At a time when there are huge gaps for people in the process of earthquake reconstruction, HAMI, a consortium of rights and civil society organizations, has been monitoring the situation and raising the voices of earthquake victims from time to time.

“These two reports are part of our work to bring the state of earthquake victims and reconstruction to notice. We have already organized several programs to pressurize and draw attention of policy makers, government and different stakeholders to speed up the reconstruction process, formulate and promulgate policies and acts related to disaster management ensuring people’s participation in post reconstruction process,” said Min Bahadur Shahi, convener of HAMI.

“A dignified rehabilitation of disaster survivors requires adequate support to help them revive their livelihoods. Loss of arable lands and businesses after a disaster leaves many families struggling to regain their livelihoods. Many end up taking up menial work, such as crushing stones, to earn some extra income to feed their families. They are also likely to become vulnerable to other forms of exploitation,” said a report published by HAMI.

In the last three years, HAMI, a consortium of human rights and civil society organizations, in partnership with Oxfam in Nepal, has organized several programs raising the issues of landless victims without tenant rights and reconstruction after earthquake as the right of that community. It organized caravans in Gorkha, Rasuwa, Dhading, Nuwakot, Dolakha and Sindhupalchwok districts, issuing declarations. In Caravans, many shared their disappointment and feelings in front of the members of Legislature Parliament and civil society organizations.

In all these programs, HAMI invited victims from different parts of the earthquake affected areas, relief agencies, NGOs, members of Legislature Parliament and local politicians and local administrators.

These programs call on all concerned agencies to provide earthquake victims the necessary support to reconstruct their houses and shelters, paving the way for their dignified life.

In 2016, HAMI hosted the first Caravan in Barpak, epicenter of Gorkha earthquake, and issued a declaration calling on authorities to accelerate reconstruction. Participated by members of parliament, leaders of political parties, NGOs, local community, victims and others, the event saw first Barpak declarations helping bring changes in the policy level. Following several such conferences, National Reconstruction Authority (NRA) and government have announced programs to accelerate the process.

All the caravans and declarations have also expressed the concern that the budget allocated by the government to reconstruction has not been spent optimally to ensure the rights of earthquake affected communities. The declarations also urge the government to get the affected community involved in the process of ensuring transparency and accountability.

Hami’s report said that those farmers cultivating land for hundreds of years without land registration certificate, extended families with verbal agreement of property share, separated, single or divorced women, and those whose husbands or male members are abroad and the property is in their name are in problems to get the grant.

“The issue of sustainable and resilient recovery needs to be addressed effectively. Commitment to meeting the needs of the most vulnerable communities by the government, non-government or private sectors cannot be just rhetorical or remain at the theoretical level in planning; this has to be articulated clearly in project activities. Unfortunately, many commitments made by the respective sectors have yet to be materialized. While there are many lessons to be learned from Nepal’s post-earthquake reconstruction, the most important is that we need to plan as rigorously as possible, but also leave room to be flexible, open to mid-course corrections, adaptable and responsive to unforeseen problems, to reach the unreached, to continuously learn from our own experience and that of other countries’ recovery operations,” said HAMI.

These reports also bring the critical analysis of the post-earthquake reconstruction aid and its effectiveness to address the needs and expectations of earthquake affected people. The reports highlight efforts and progresses made to rebuild quake destroyed infrastructures and houses by assessing the role of the government, international community, non-government and private sectors in response to earthquake.

In a partnership with Oxfam-Nepal, Humanitarian Accountability Monitoring Initiative (HAMI) is supporting the government by bringing the community voices to the discussion with policy makers and thereby urging them to implement people centered, inclusive, transparent and community owned reconstruction process.