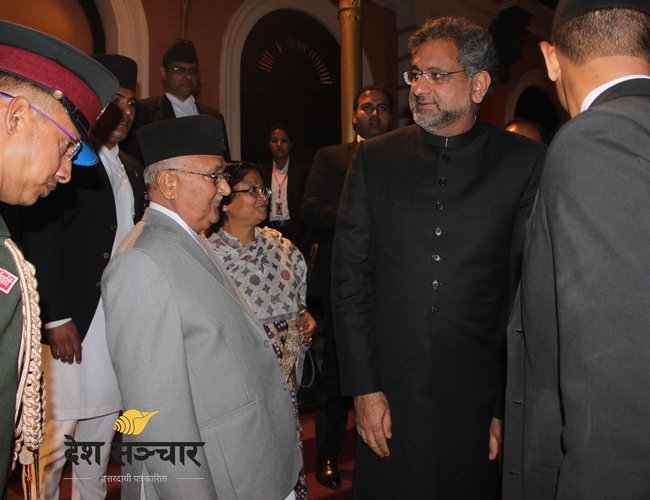 During the meeting, matters related to enhancing bilateral cooperation in the fields of investment, trade, tourism, agriculture, and human resources development were discussed. The two leaders agreed to hold regularly the meetings of bilateral mechanisms.

According to Pakistani media report, the sole objective of the visit was to take forward the stalled SAARC process, with Pakistan seeking to host the deferred summit of the South Asian Association for Regional Cooperation at the earliest in consultation with Nepal, the current chair of the regional grouping.

The Prime Minister of the Islamic Republic of Pakistan arrived Monday for a 2-day official visit. He was received at the Tribhuvan International Airport by  Dr. Yubaraj Khatiwada, Minister for Finance, Shanker Das Bairagi, Foreign Secretary, Ambassador of Nepal to Pakistan, Ambassador of Pakistan to Nepal and other senior officials of both countries.

The Prime Minister of Pakistan will return home on 6th March 2018.

COVID-19: Number Of Children Living In Household Poverty To Soar By Up To 86 Million By End Of Year By NEW SPOTLIGHT ONLINE 16 hours, 32 minutes ago

Twelve Nepali Migrant Returnees Killed and 20 Injured In a Bus Accident In Banke By NEW SPOTLIGHT ONLINE 1 day, 2 hours ago

Nepal Extends Lockdown Until June 14 And Suspended All Flights Till June 30 By NEW SPOTLIGHT ONLINE 2 days, 13 hours ago