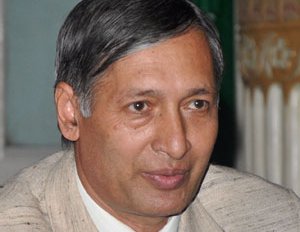 The main opposition Nepali Congress came down heavily upon Finance Minister Yuba Raj Khatiwada on Tuesday for presenting economic data “as per his convenience” to mislead the public and downplay the roles of previous governments in the country’s economic development.

Minister Khatiwada, while presenting the white paper on current economic situation of the country on Friday, had painted a gloomy picture of the country’s economy, stating “macroeconomic indicators are not sound, budgetary position is weak due to fiscal indiscipline and dependence on revenue generated through imports is expediting deindustrialisation process”.

“It is not appropriate to incite fear in an unnecessary manner at a time when the shift from unitary to federal system of government has paved the way for Nepal to embark on a journey of sustained economic development and prosperity,” Nepali Congress leader Minendra Rijal told the Parliament.

Rijal offered a robust defence of achievements made in the past, which, according to him, helped the economy to reach the current stage. “But the incumbent finance minister has cherry-picked economic data to discredit others,” he said.

According to The Kathmandu Post, in the fiscal year 1990-91, Nepal’s gross domestic product hovered around Rs120 billion, said Rijal. It has now soared by 22 times to around Rs 2,600 billion, he added. In 1989-1990, Nepal’s annual revenue collection stood at around Rs10.73 billion, whereas the government is targeting to collect revenue to the tune of Rs730 billion in the current fiscal year.

“Nepal’s revenue collection has soared over the years because of introduction of value added tax and reforms made in income tax regime and tax administration,” Rijal said, highlighting the achievements of the governments led by Nepali Congress in the past. “Because of these changes, the government today does not have to rely much on foreign aid while preparing its annual budget, whereas in 1989-90, over a third of government’s annual budget used to comprise foreign aid.”

Rijal also took a swing at Khatiwada for “distorting figures on trade”. “In 1989-1990, Nepal’s export stood at Rs7.5 billion, while imports hovered around Rs25 billion. Today, Nepal imports goods worth Rs773 billion and exports goods worth Rs70 billion. Over these years, exports have gone up by mere 9 times, whereas imports have gone up by over 30 times. This is the result of lack of investment in productive sectors, inability to encourage the private sector to invest in productive sectors and political problems,” Rijal said. “Yet in 2000-2001, Nepal’s exports earning stood at 56 percent of expenditure made on imports. Since then our exports started faltering, as Maoist insurgency intensified, domestic production fell, foreign investment petered out and the country embarked on a lengthy peace process [after Maoists discarded arms and joined the mainstream politics].” These developments and problems, according to Rijal, were not highlighted through the white paper. “As a result, a biased snapshot of the economy has been presented.”

CPN (Maoist Centre) leader Pambha Bhusal also criticised Khatiwada for “painting a bleak picture of the economy and failing to instil hopes of a better future”. Prem Suwal of Nepal Majdoor Kisan Party and Anil Jha of Rastriya Janata Party Nepal, meanwhile, have called on Parliament to form an investigation committee to analyse why a negative picture of the economy was presented and take necessary action against those involved in fiscal indiscipline.

Despite these criticisms, Minister Katiwada denied to dig his heels in. He said: “Truth is always bitter.”

“The white paper is fully based on facts. I reiterate the country’s economic indicators, especially budgetary position, are not sound,” he said, adding, “This, however, should not mean we are turning into a failed state and the economy is on the verge of collapse.”

COVID-19: Number Of Children Living In Household Poverty To Soar By Up To 86 Million By End Of Year By NEW SPOTLIGHT ONLINE 16 hours, 57 minutes ago

Twelve Nepali Migrant Returnees Killed and 20 Injured In a Bus Accident In Banke By NEW SPOTLIGHT ONLINE 1 day, 3 hours ago

Nepal Extends Lockdown Until June 14 And Suspended All Flights Till June 30 By NEW SPOTLIGHT ONLINE 2 days, 13 hours ago