Finance Minister Yubaraj Khatiwada has launched the first ever federal budget of Rs 1.315 trillion for the fiscal year 2018/19, today. 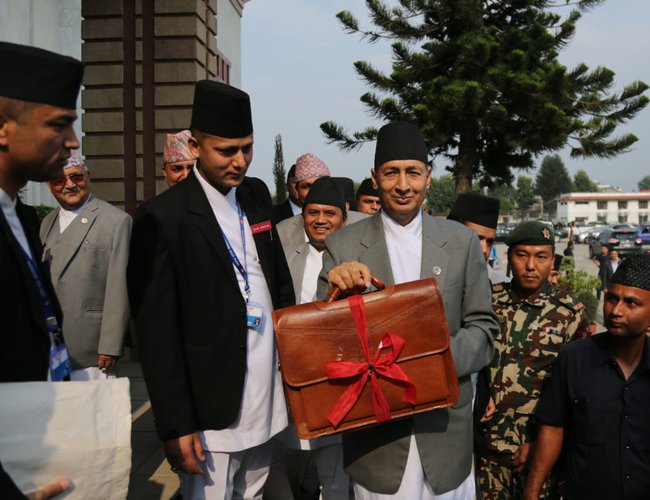 Finance Minister Yubaraj Khatiwada has launched the first ever federal budget of Rs 1.315 trillion for the fiscal year 2018/19, today.

Out of the total budget, government aims to utilise Rs845.5 billion as recurrent expenditure. Likewise, Rs314.28 billion and Rs155.18 billion have been earmarked for capital expenditure and financing provision, respectively.

Moreover, the government has set a revenue collection target of Rs831 billion. Likewise, the government will seek foreign grants and loans of Rs58 billion and Rs 253billion, respectively. Internal loan amounting Rs172 billion is expected to balance the expenditures and sources of the budget.

Economic growth in the upcoming fiscal has been projected at 8 per cent.

Rs 3.10 billion has been allocated to initiate Prime Minister Employment Programme with an aim to generate employment opportunities. Moreover, the government has decided to provide 5 per cent concessional loan of Rs 700,000 backed by educational certificates to help young entrepreneurs to launch their ventures.

Prime Minister, members of the Council of Ministers, members of both the houses of the parliament and foreign dignitaries were attending the presentation.