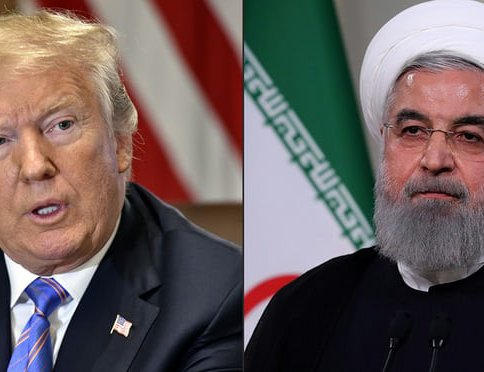 Donald Trump has said he would “certainly meet” Iranian president Hassan Rouhani without preconditions, a move that was later rejected by Trump’s own administration and one of Rouhani’s advisers.

Speaking during a joint news conference with Italy’s prime minister, Giuseppe Conte, Trump said he would meet Iran “anytime they want to”. “I’ll meet with anybody,” he said. “There’s nothing wrong with meeting.”

Trump’s apparently spontaneous overture marked a significant shift in tone and follows escalating rhetoric in the wake of his dumping in May of the landmark Iran nuclear accord.

The administration is set next month to begin reimposing sanctions that had been lifted under the 2015 deal and has been ratcheting up a pressure campaign on the Islamic republic that many suspect is aimed at regime change.

After the comment, secretary of state Mike Pompeo appeared to contradict Trump, listing preconditions that had to be met first. He told CNBC on Monday: “If the Iranians demonstrate a commitment to make fundamental changes in how they treat their own people, reduce their malign behaviour, can agree that it’s worthwhile to enter in a nuclear agreement that actually prevents proliferation, then the president said he’s prepared to sit down and have a conversation with him,” he said.

Hamid Aboutalebi, one of Rouhani’s advisers, set his own conditions for any meeting with Trump, saying “respect for the great nation of Iran”, returning to the nuclear deal and a reduction in hostilities were needed first.

Trump has long cast himself as a master negotiator who is most effective when he meets his counterparts face-to-face. He pointed to his recent one-on-ones with North Korean leader Kim Jong-un and Russia president Vladimir Putin as examples of the benefits of such get-togethers, though both drew bipartisan criticism and doubts about the tangible progress achieved.

Republican Bob Corker, the Senate foreign relations committee chairman, characterised the overture as “fine” but only “as long as they are willing to talk about being a normal country in the future”.

It was “another recipe for bad outcomes”, said democrat Bob Menendez. “It’s the same as North Korea,” he said. “No preconditions, no preparation. And what do we have? We have Kim Jong-un elevated from an international pariah to someone who seems like a legitimate statesman.”