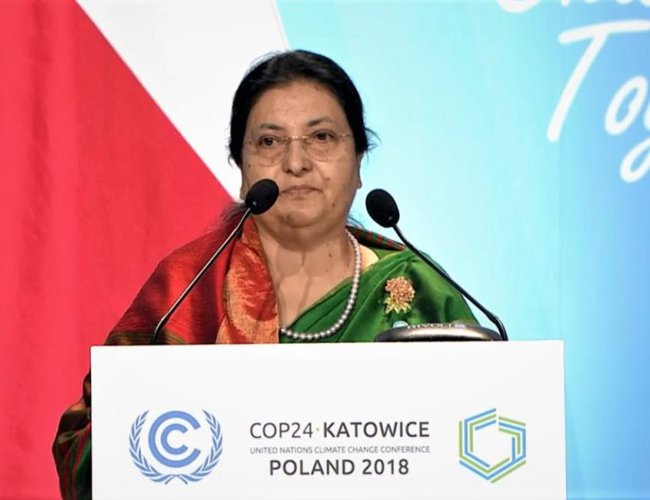 Nepal is a Least Developed Country consisting of mountain and terai. Nepal releases very nominal carbon emissions but it has been facing the impacts of climate change. Snow is melting in the high Himalayas, white ice has become black and there are growing possibilities of melting glaciers. There is a high increasing the chance of glacier outbursts, droughts and landslides. Due to negative impacts on the natural resources, the water distribution systems of rural Nepal have been affected.

We have to spend a large portion of national income to solve the problems caused by natural disasters. The land of terai, which is a main source of agriculture, has been frequently facing floods and it has affected production levels. These disasters have been directly affecting the lives of women and of the poor communities. We know Nepalese women are spending hours fetching water for household purposes. We have been suffering from a burden which we are not entirely responsible for. I would like to remind you that it is the responsibility of the global community not to do injustice to innocent people who do not contribute to carbon emissions as much as other nations. We believe that the 1.5 degree Celsius temperature, set by the recently released special report of IPCC threshold, will encourage the world community to express commitment to reduce the release of carbon emissions.

Nepal is a country that prevents global warning naturally. Sagarmatha, the highest mountain in the world, and other mountains have been cooling the air and water, making them clean and cold. In fact, the Himalayas and seas are the creators of the environment and climate. The slow melting of ice from the Himalayas helps make the land fertile. This water recharging system plays a vital role in maintaining temperature. The countries which are generating more carbon need to understand this importance and show concern not to damage the environment of Himalayan countries. We have been making efforts to implement model climate change related projects, along with the national and local level National Adaptation Plan to minimize the risks of climate change. To implement the Paris Agreement effectively, we are reviewing NDC and Climate change policy.

We have already started utilizing electric vehicles in the Presidential Offices and are working to expand it. We have also been implementing integrated environmental protection and livelihood projects under Rashtrpati Chure Protection Program. This project will contribute to the environmental protection and conservation in Nepal as well as its neighbors. Nepal is committed to be an environmentally friendly county and our development should not be at the cost of destruction of nature. We have been protecting or natural forests to minimize the impacts of climate change.

Excerpts of the statement delivered by President Bidhya Devi Bhandari at 24 UNFCCC COP meeting held in Poland on December 3.