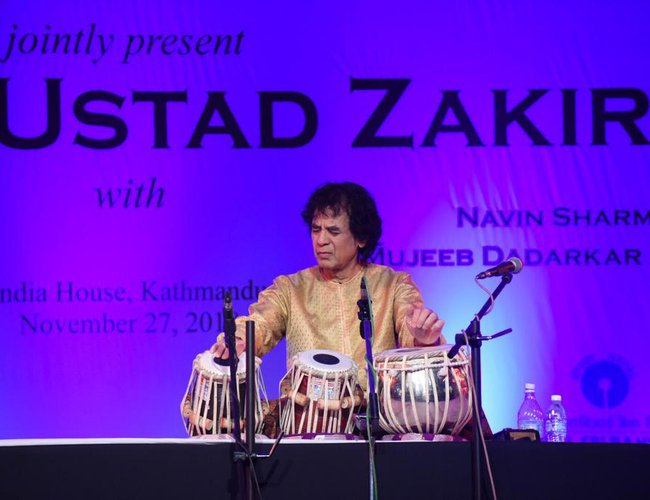 Ustad Zakir Hussain, Sabir Khan, Navin Sharma and Anantha R. Krishnan played Tabla, Sarangi, Dholak and Mridangam respectively at the Indian House, Embassy of India in Kathmandu on 27th of November 2018. It was a mesmerizing and enchanting one hour forty five minutes. There was no pause.

“We will play for about ninety minutes continuously,” said Zakir and the crowd applauded. It sounded like the duration was more than they had expected. Towards the end of the performance Ustad Zakir Hussain's Tabla spoke “come, sit, drink, eat, get satisfied, listen to concert and go.”

He admitted the invitation came a little late for the backbenchers who were also looking at the performance from the big screens placed on the sides.

Ustad Zakir Hussain also performed Rela and Hiran Paran. Then he urged the audience to listen to the “rhythm of the falling rains” and sounds of lightning.

I would have preferred not to have him informed us about what he was playing. It conditioned our minds. I would have loved to listen to him absolutely. Not in relation to anything. His hands and fingers on Tabla was magic, divinely and unbelievable. Probably it was divinely because it was inexpressible in words. His face calm and composed, his hands and fingers were sliding and striking on Tabla at an unbelievable pace. Sometimes quickly, sometimes touching it softly. His face was deceiving that he was playing. He looked relaxed but his hands and fingers worked wonders on Tabla. His mind, hands and fingers must have been in complete harmony while playing Tabla. The five fingers of each hand were in complete coordination while striking the Tabla at an unbelievable pace. It wasn't one time affair. It was continuously erupting. This was the difference I found between Ustad Zakir Hussain and Sabir Khan who played Sarangi equally good but had those unbelievable grasping moments once or twice.

Sabir Khan's fingers moved on the strings of Sarangi equalling the 'melody' for all three traditional instruments. Ustad Zakir Hussain in all humbleness had in the beginning introduced Sabir Khan, Navin Sharma and Anantha Krishnan as 'equals' during performance. They did enliven the spirits of the crowd gathered.

Anantha Krishnan was good in Mridangam. I overheard a girl from the crowd say it was 'soothing'. It looked like Anantha teased Ustad Zakir Hussain and Ustad responded aptly. There were times when four of them spoke the language of music together. It appealed to the audience and they applauded. Zakir had already informed us that Tabla has a language. In his words “fifty odd years ago these instruments were not played together. These instruments originated from different parts of India. But today it was possible through technological advancement and interaction between musicians. Now Sarangi could play all aspects of Tabla.”

Before playing Rela, Zakir told us that it was composed on the orders of some Nawab as he was fascinated by the sound of the rail. It depicted the sound of the steam rail. Hiran Paran was about a deer fetching food and during this search it would be startled by the sight of a hunter and would leap away into wilderness. The leap of the deer was emphasized. It sounded like all four played Hiran Paran through their instruments individually too.

At the end Sabir Khan sang a hymn and Zakir Hussain joined his reddened hands together thanking everyone for their presence.

The event was made possible and hosted by the Embassy of India, Kathmandu. Our financial burdens were shouldered by Surya Nepal, Raddison Hotel, Nepal SBI Bank Ltd. and Jet Airways who had sponsored the event. Notice of the event was advertised in the national daily. An email showing an interest to attend the event had to be registered.

I have been inspired by Ustad Zakir Hussain to communicate my impressions through this write-up. If Tabla could speak a language, it is an inspiration for me to write, having witnessed this iconic personality play his instrument. I endeavor to write not knowing whether I would do justice to him.