Democracy Is For Everyone: PM Oli

Democracy is for everyone and in exercising democratic rights everybody should be responsible, he said. 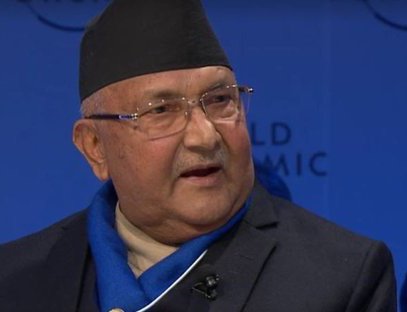 Prime Minister K.P. Sharma Oli said tha the Government under his leadership was taking a comprehensive approach to democracy, embracing the principle that government does not rule with power but serves the people with commitment to uplifting their standard of life and ensuring dignity and well-being for everyone.

The Prime Minister also stated that press enjoyed freedom in Nepal. Democracy is for everyone and in exercising democratic rights everybody should be responsible, he said.

The Prime Minister was one of the panelists in the session, which was moderated by Associate Editor and Chief Economics Commentator of Financial Times Martin Wolf. The high-level panel consisted of Prime Minister of Armenia Nikol Pashinyan and President of Colombia Ivan Duque, among others.

Following this session, the Prime Minister attended the Informal Gathering of World Economic Leaders (IGWEL)and shared views on the theme of “The End of Global Trade as We Know It?”.

On the occasion, he stressed the need for reviving multilateralism and rules-based international trading system that promotes and protects the concerns and interests of the least developed and landlocked countries like Nepal. The Prime Minister had an opportunity to interaction the theme of global trade with the leaders of G-20 countries as well as prominent business persons.

On the sidelines, the Prime Minister had a bilateral meeting with the Prime Minister of Vietnam, Nguyen Xuan Phuc. The two leaders discussed various matters of Nepal-Vietnam relations. They underscored the need to enhance economic engagements in the areas of trade, investment, connectivity and tourism as well as the necessity to exchange high-level visits between the two countries.

Earlier this morning, Chief Executive Officer of Swiss pharmaceutical production company Novartis Vasant Narasimhan and Chairman and CEO of KPMG India Arun Kumar also called on the Prime Minister on the margins of the WEF Annual Meeting. Discussions about possible investment in Nepal’s priority sectors were held in the meetings.

Finance Minister Dr. Yuba Raj Khatiwada attended a session on the theme of “More than GDP”at the WEF Annual Meeting.

Minister Dr. Khatiwada also had a meeting with Director of Netherlands-based company Arcadis Ms. Carolien Gehrels. Matters about investment in and development assistance to Nepal were discussed on the occasion.

United Nations High Commissioner for Refugees Filippo Grandi called on Minister for Foreign Affairs Pradeep Kumar Gyawali. They discussed matters related to refugees in Nepal as well as the Global Compact on Refugees.

According to a press release issued by Embassy of Nepal Geneva, Switzerland, besides these engagements, the Prime Minister, Minister for Foreign Affairs, Finance Minister and other high-ranking officials of the delegation had informal interactions with various government and business leaders attending the WEF Annual Meeting. Issues pertaining to Nepal’s development policies, plans and priorities were featured prominently during those interactions.

Bhanu Jayanti Observed Across Nepal And Some Parts Of India Amid Coronavirus Pandemic By NEW SPOTLIGHT ONLINE 1 day, 2 hours ago

Monsoon Takes 77 Lives In A Month By NEW SPOTLIGHT ONLINE 1 day, 11 hours ago