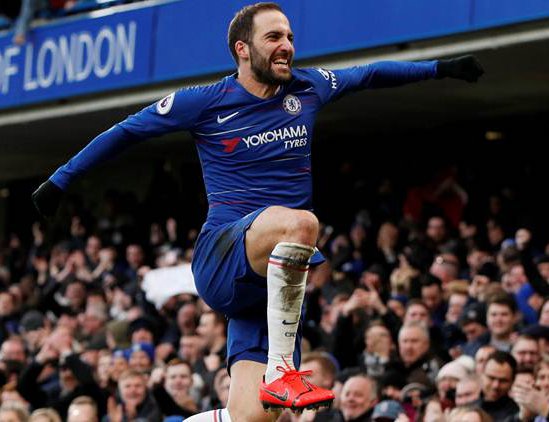 This time there was no need for Maurizio Sarri to get mad with his players. The Chelsea manager could instead sit back and enjoy their performance in a 5-0 win over Huddersfield that lifted them back into the top four in the English Premier League on Saturday. Doubles from Gonzalo Higuain _ his first goals since joining on loan from Juventus _ and Eden Hazard helped Chelsea bounce back from two straight league losses that jeopardized their Champions League qualification hopes and left Sarri wondering where to turn next.

After losing to Arsenal 2-0, Sarri questioned the attitude and temperament of his players. After losing at Bournemouth 4-0 on Wednesday, he locked them in a dressing room and demanded answers. The response? Chelsea’s biggest win of the season, albeit against a team in last place in the league and surely heading to the second tier.

“Today is all positive,” Sarri said. “We played a full 90 minutes, defended very well, so it was a very good match but we need consistency now. We have to continue to play with the same mentality in all the matches. “I hope in the future we will not need a lost match to find the right mentality.”

While Chelsea still has plenty of work to do to secure a top-four spot, especially with a resurgent Manchester United just five points back in sixth with a game in hand, Tottenham is looking more and more safe. A title challenge is looking increasingly possible, too, after a 1-0 win over Newcastle that lifted the team into second place.

Tottenham has Qatar to thank for staying in the title race. Son Heung-min had an earlier-than-expected return from the Asian Cup after South Korea was beaten by eventual champion Qatar in the quarterfinals. Since he has been back in England, Son has scored in both of his league games, the 2-1 come-from-behind victory over Watford in midweek and now the win over Newcastle.

Son’s shot from the edge of the area looked harmless, but it went through the grasp of Newcastle goalkeeper Martin Dubravka and into the middle of the goal in the 83rd minute.

He played the full match, just like he did against Watford, after which Tottenham manager Mauricio Pochettino said Son was very tired and had cramp. “He works so hard, he pushes, and never gives up _ he tries, tries, tries, tries,” Pochettino said. “His effort, with or without the ball, is always very regular and consistent and that is the most important.

“Sonny is like a battery that you have _ you work, work, work until the battery is gone.”

It was Tottenham’s third straight victory in the league, with the winning goal in each of the games _ against Fulham, Watford and now Newcastle _ coming in the final minutes.

Tottenham moved a point ahead of City, which plays Arsenal on Sunday, and four behind Liverpool, which visits West Ham on Monday.

If Sarri was the manager under pressure coming into this weekend, that mantle has shifted firmly to Everton’s Marco Silva.

Jeers accompanied the final whistle at Goodison Park as Everton lost at home to Wolverhampton Wanderers 3-1, a week after exiting the FA Cup at the hands of second-tier Millwall. Everton is in ninth place and majority shareholder Farhad Moshiri isn’t getting a return from his $350 million of investment over the past two years.

The game was delayed for three minutes after a black cat strayed onto the field. “Sign him up,” disgruntled Everton fans chanted.

Goals by Ruben Neves _ from the penalty spot _ Raul Jimenez and Leander Dendoncker allowed Wolves to consolidate seventh place in an encouraging first season back in the top flight.

After scoring the first of his two goals, Bobby Reid raced to the home dugout with his teammates and they held up a T-shirt adorned with Sala’s image _ and Cardiff’s fans responded with applause.

There was a period of reflection in honor of Sala before kickoff, when both sets of players joined arms around the center circle. Before that, both captains carried out bouquets of flowers and Cardiff’s supporters held yellow, white, and light blue squares, paying tribute to the Argentine.

A plane carrying Sala and pilot David Ibbotson disappeared from radar last week over the English Channel. The flight was going from the French city of Nantes to Cardiff, where Sala was set to start playing for his new club.

Enough money has been raised online to allow Sala’s family to fund a private search, after an official rescue operation for the light aircraft was called off with authorities saying there were unlikely to be any survivors.

Burnley was awarded a penalty in the Premier League for the first time in nearly two years. It earned the team a last-gasp draw against Southampton.

Ashley Barnes converted the spot kick in the fourth minute of injury time to secure a 1-1 draw for Burnley. It kept both teams unbeaten in the league in 2019.

Burnley had gone 68 league matches without a penalty stretching back to April 2017.

Crystal Palace won at home over next-to-last Fulham 2-0, and Brighton and Watford drew 0-0.

FIFA President To Continue In Role Amid Criminal Investigation By Agencies 1 week, 3 days ago