Nagging Sore Throat Can Be A Sign Of Cancer: Study

Nagging Sore Throat Can Be A Sign Of Cancer: Study 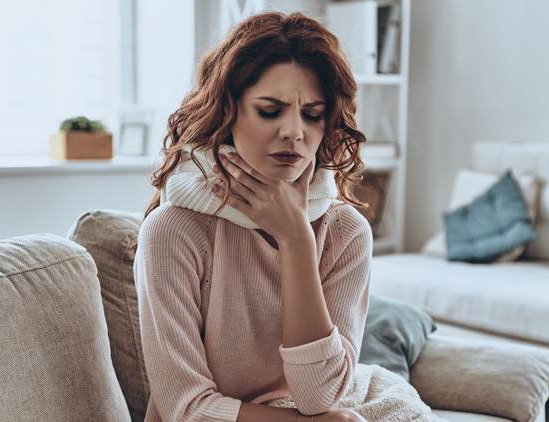 Persistent sore throat, according to a recent research, can be symptomatic of cancer. The report that was quoted in BBC states that if a nagging sore throat is accompanied with earache, trouble in swallowing and shortness of breath then it can be considered as a sign of cancer.

Weilin Wu at Cancer Research, UK, however, has said that there is no need to be alarmed. “A sore throat on its own wasn’t linked to laryngeal cancer,” he said. “But importantly, this study also provides the best evidence to date to support the current recommendation to refer older patients with persistent hoarseness.”

The research, that was led by the University of Exeter, was published in the British Journal of General Practice.

Dr Elizabeth Shephard, the lead author, opined that it was one of the firsts to really look at all the symptoms that can be important for laryngeal cancer.

“The significance of the study really is that we’ve found that hoarseness is important for laryngeal cancer, but significantly the risk of having laryngeal cancer greatly increases when it’s combined with a recurrent sore throat,” she said.

Professor Willie Hamilton, one of the authors of the study and the clinical lead for the current guidelines from The National Institute for Health and Care Excellence (NICE) emphasised on the importance of the research as it “has shown the potential severity of some symptom combinations previously thought to be low risk.”

“When NICE guidance for cancer investigation was published, there was no evidence from GP practices to guide this – nor to inform GPs,” he said. However, he also maintained that they are considering only those with sore throat that is severe enough to go to the general practitioner.

Too Many Countries Headed In Wrong Direction: WHO By NEW SPOTLIGHT ONLINE 11 hours, 15 minutes ago

The Reconstruction Of Ranipokhari Will Complete Within Two Months By NEW SPOTLIGHT ONLINE Jul 14, 2020